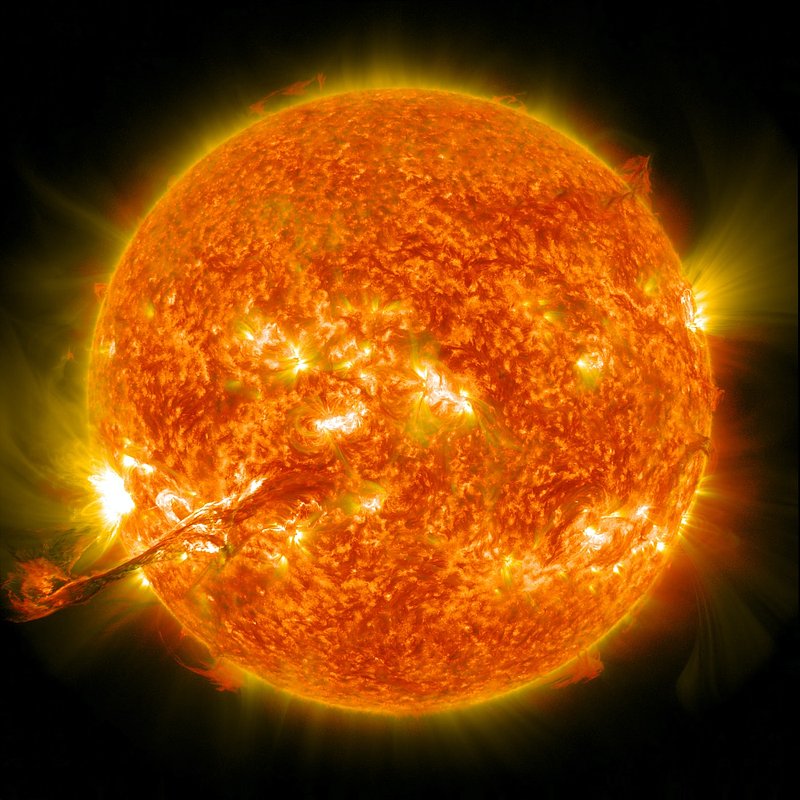 The Sun is the closest star to Earth and the centre of our Solar System. It allows life on Earth and provides us with light and warmth. But what is a star?

Confucius once said, “stars are holes in the sky from which the light of the infinite shines”. While I do love this quote, is it all there is to it? How do stars form? And how do they work?#
Stars are extremely hot and shining celestial bodies that form from clouds of space gas (mostly hydrogen and helium) and dust, which come together due to gravitational attraction. As more and more particles are attracted to each other, the pressure from gravity increases causing the material at the centre to heat up.

Throughout their life, stars are then supported against their own gravity thanks to the thermonuclear fusion that happens in their core, which converts hydrogen into helium releasing huge amounts of photons (light) and energy into space.

When small and medium sized stars run out of hydrogen, their life comes to an end and all they leave behind is their core, which then slowly cools down. Massive stars, on the other hand, are so hot that they are able to fuse heavier metals such as helium and carbon before exploding in spectacular supernovae, leaving behind their core to become a neutron star or, for stars over a certain mass, black holes.

Our Sun is a medium sized star, categorised as a yellow dwarf star. Nevertheless, it is the largest object in our Solar System, accounting for 99.8% of the total mass: it would take approximately 1.3 million Earths to fill the Sun! Its immense gravitational attraction is what holds the Solar System together, keeping planets, moons and all sort of objects around its orbit.

Our host star is obviously particularly important to us as well. The light and heat it radiates makes life on Earth possible: they give the plants the energy they need to grow and produce food and oxygen. The Sun also drives the seasons, the weather, ocean currents, climate and those breath-taking auroras we all love.

Formed approximately 4.5 billion years ago, according to scientists, the Sun is halfway through its lifetime, which will end in around 5 or 6 billion years. It is believed that, when approaching the end of its life, the Sun will become so big that it will swallow Mercury and Venus, the closest planets, and potentially even Earth.

The Sun, and with it the whole Solar System, are located in a spiral arm of our galaxy, the Milky Way. From there, it orbits the centre of the galaxy at an average speed of 720,000 kmh (450,000 mph) completing a full orbit in around 230 million years.

Earth lies at an average distance of approximately 149,600,000 km (92,900,000 miles) from the Sun, which is the equivalent of 1 astronomical unit (AU). At this distance, the Sun is only 8 light minutes away from us, meaning that if the Sun were to go suddenly dark, we would only realise it after 8 minutes. By comparison, the second closer star to Earth is Proxima Centauri, which lies some 4.5 light years away.

The composition of the Sun can be divided into six layers: the core, the radiative zone and the convective zone form the interior structure whereas the photosphere, the chromosphere and the corona (crown) are part of the visible surface. Temperatures vary dramatically, from 15 million degrees C (27 million degrees F) at the core, to around 5,500 degrees C (10,000 degrees F) at the photosphere.

The chromosphere, alongside the Corona, is perhaps the most interesting layer. At this level, it is possible to detect the Sun’s active regions or “sunspots”: these are areas of extreme magnetic field from which most solar storms, including solar flares and coronal mass ejections (CME), are formed.

The sunspots are a clear indicator of the solar activity as it goes through the phases of its own solar cycle, which last approximately 11 years. During “Solar maximum” the number of active regions, solar flares and coronal mass ejections increases dramatically, whereas at “Solar minimum” the number of sunspots tends to fade.

This is particularly important because such irregularities in the Sun's magnetic field can release huge amounts of energy that, although not dangerous for life on hearth, can damage satellites and pose a risk for astronauts in space.

Seen through a telescope with the right filter (never look at the Sun without a proper filter!), the Sun is a jaw-dropping view, perhaps one of the most interesting sights in our Solar System. To conclude with another quote: “The Sun is not God, though His noblest image” (Robert Dodsley).