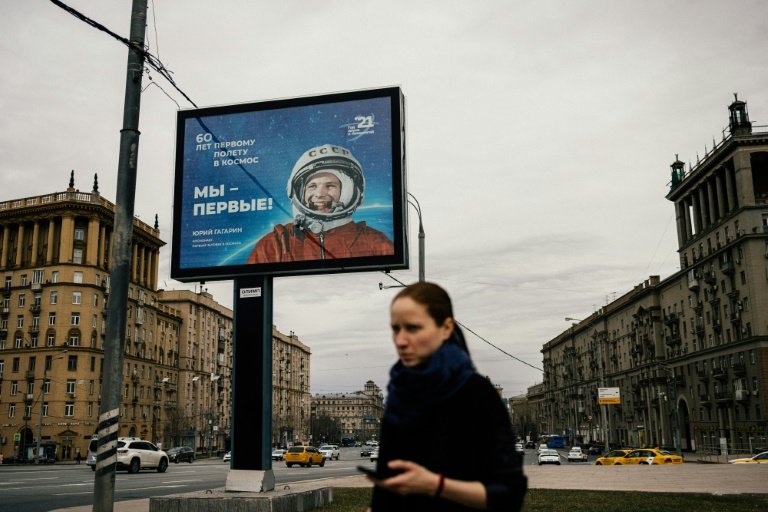 Yuri Gagarin is a national hero in Russia. / © AFP

President Vladimir Putin called on Monday for Russia to remain a great power in space, as the country celebrated the 60th anniversary of the legendary flight that made Yuri Gagarin the first person in orbit.

Russia's space industry has struggled in recent years and been hit by a series of mishaps, but the sending of the first human into space on April 12, 1961 remains a major source of national pride.

After visiting a memorial in southern Russia at the site where Gagarin landed after his 108-minute trip around the Earth, Putin told his government to do more to maintain Moscow's position in space.

"In the 21st century, Russia must retain its status as a nuclear and space power," Putin said in the televised remarks.

"We will analyse what needs to be done to strengthen our position in this strategic industry," he said, noting that the space programme is "directly related" to national defence. 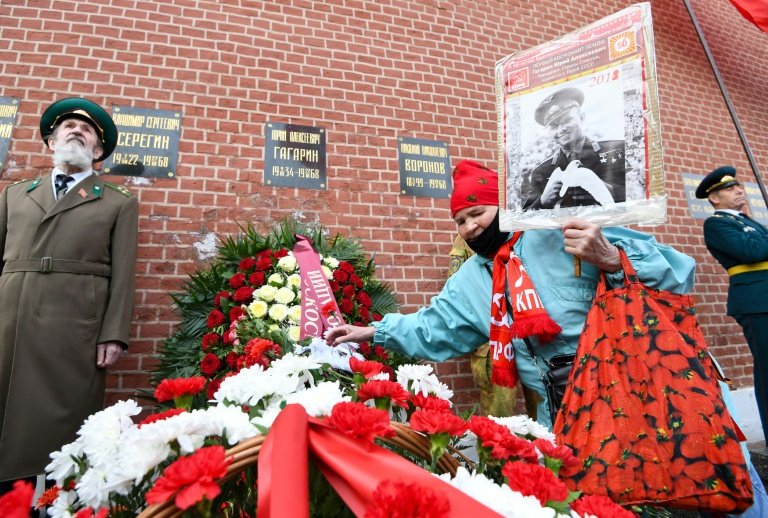 Putin called for a review of major projects and a new space development strategy over at least 10 years.

The day of Gagarin's flight is celebrated every year in Russia as Cosmonautics Day, and this year authorities pulled out all the stops to mark the 60th anniversary, with round-the-clock television coverage, murals on high-rises and laser projections of Gagarin's portrait.

For Moscow commuters, the morning started with a broadcast on the metro of the original report by state news agency TASS about the launch, followed by Gagarin's legendary words -- "Poekhali!" (Let's go) -- as his Vostok spacecraft lifted off.

In a message from the International Space Station, the four Russians on board saluted "all earthlings" and hailed Gagarin's accomplishment.

"Gagarin's legendary 108-minute flight became an example of heroism for his successors, including us," said cosmonaut Oleg Novitsky. 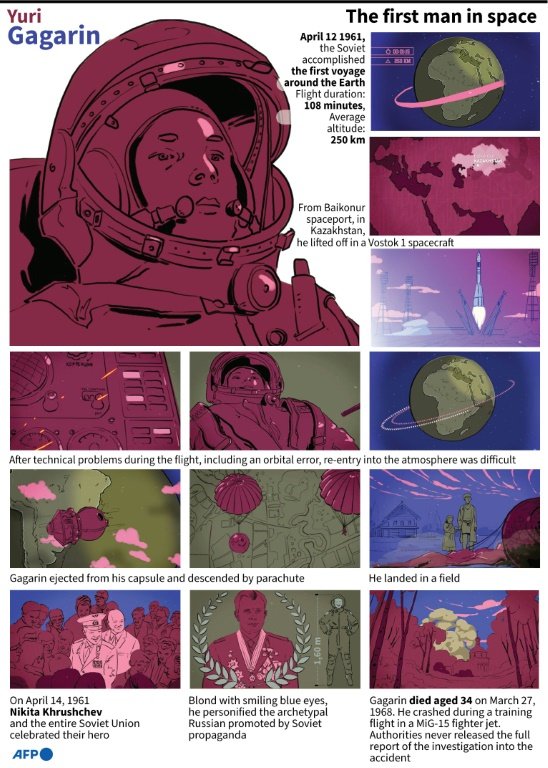 Vostok took off carrying Gagarin, the 27-year-old son of a carpenter and a dairy farmer, from the Baikonur cosmodrome in Kazakhstan, then part of the Soviet Union.

The flight lasted just 108 minutes, the time it took to complete one loop around the Earth.

Gagarin landed in a potato field in front of a five-year-old girl, Rita Nurskanova, and her grandmother.

In an interview with newspaper Moskovsky Komsomolets for the anniversary, Nurskanova said that after seeing a flash of light and a spacesuit, her grandmother started to pray and wanted to run.

Gagarin calmed them down, saying he was human and "came from the sky," she said. Then her grandmother helped him unfasten his helmet.

Gagarin's now-rusty Vostok capsule is on display at Moscow's Museum of Cosmonautics where a new exhibition dedicated to his achievement is set to open on Tuesday. 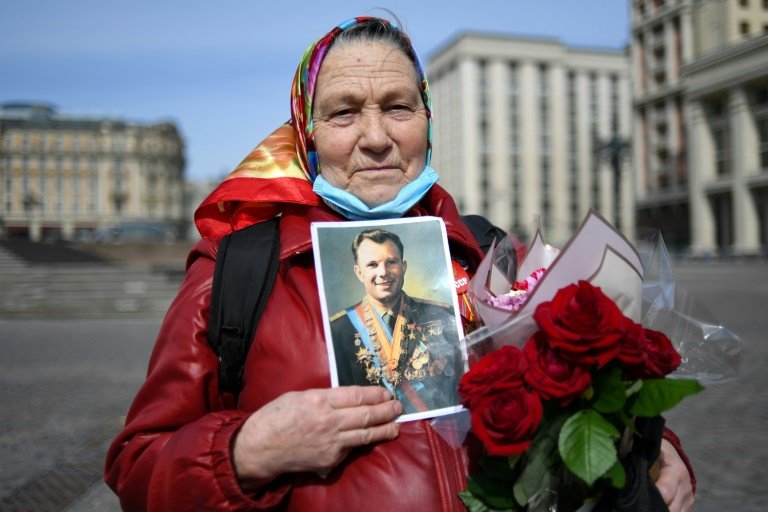 Visitors will be shown documents, photos and personal belongings, some dating back to Gagarin's childhood and school years.

"This is probably the only surname that everyone knows, from four-year-old children to people over 80," Vyacheslav Klimentov, a historian and the museum's deputy director of research, told AFP.

Gagarin's flight remains a symbol of the country's dominance in space during the Soviet era. Four years before Gagarin, the USSR had become the first country to send a satellite into orbit, called Sputnik.

"That the first manned flight into space was done by the Soviet Union was very significant for our state," Tatiana Brazhnikova, a 49-year-old school teacher, told AFP at the cosmonautics museum.

"I feel great pride in this achievement by the Soviet Union and Russia." 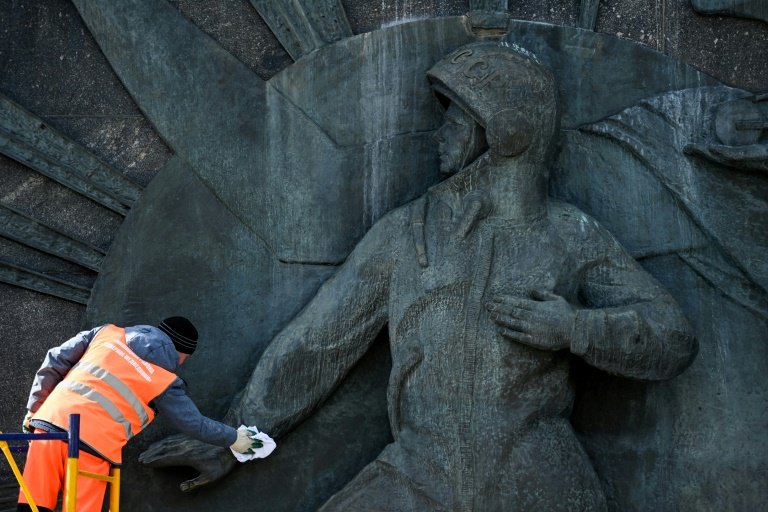 Gagarin's name is one of the few known by Russians of every generation, says Vyacheslav Klimentov, of Moscow's Museum of Cosmonautics / © AFP

But the anniversary also comes at a difficult time for Russia's space industry. It has suffered a number of setbacks in recent years, from corruption scandals to lost spacecraft to an aborted take-off during a manned mission in 2018.

Russia's ageing Soyuz rockets are reliable and allow Moscow to remain relevant in the modern space industry, but the country is struggling to innovate and keep up with other key players.

The head of Russia's Roscosmos space agency, Dmitry Rogozin, has set a series of ambitious goals for the space programme in recent years despite funding cuts.

In a video message on Monday he insisted that Russia was "on the cusp of very important changes" that will see next-generation spacecraft and lunar missions.

"We believe in our space, in Russian space," he said.