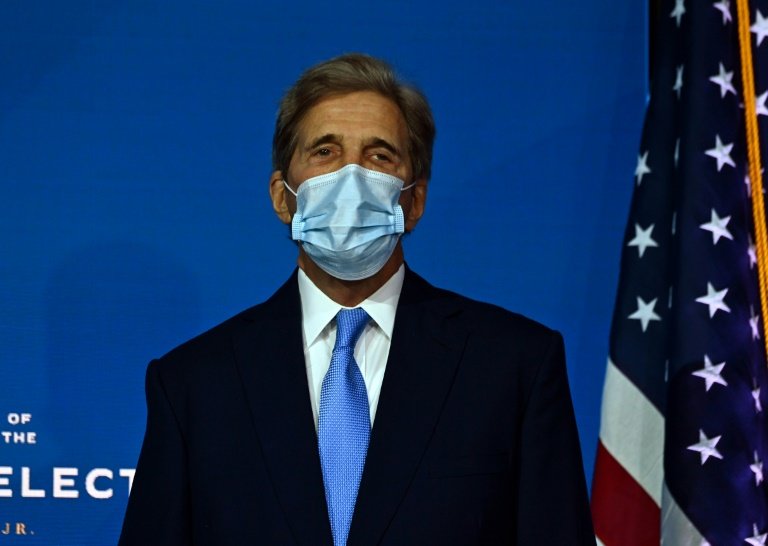 John Kerry, named as the special presidential envoy for climate, vows to seek greater ambition around the world / © AFP

Incoming US climate envoy John Kerry called Tuesday for a UN conference in Glasgow next year to raise global ambitions on environmental protection, warning that the Paris accord that he helped negotiate was insufficient.

President-elect Joe Biden has tapped the former secretary of state for the new position of presidential envoy on climate change, a sign of the importance the United States will assign the issue once he takes office on January 20.

"To end this crisis, the whole world must come together," Kerry said after Biden introduced him as part of his national security team in Wilmington, Delaware.

"At the global meeting in Glasgow one year from now, all nations must raise ambition together or we will all fail together. And failure is not an option," Kerry said.

Outgoing President Donald Trump, whose administration is close to the fossil fuel industry, called the Paris accord unfair to the United States, which became the only nation to exit the global pact.

Biden also said he would unveil next month a White House policy coordinator to lead climate measures within the United States, where carbon emissions have been declining modestly due to a variety of market forces and local and state initiatives.

"Let me be clear: I don't for a minute underestimate the difficulties of meeting my bold commitments to fighting climate change," Biden said.

"But at the same time, no one should underestimate for a minute my determination to do just that."

Negotiated by Kerry when he was the top US diplomat, the 2015 Paris accord committed all nations to limit warming to two degrees Celsius (3.6 Fahrenheit) above pre-industrial levels and encouraged them to go down to 1.5 degrees.

Scientists warn that the world is far behind in reaching the two-degree goal -- a level at which the planet will still see major effects but not the most catastrophic consequences of climate change such as widespread drought and submerged coastal areas.

In a nod to political realities in the United States, where the Senate would be virtually certain to reject a formal treaty on climate, the Paris accord depends on voluntary actions, with each nation then reporting its efforts to the United Nations.

The UN-led conference in Glasgow had been due to take place this month but was pushed back a year due to the Covid-19 pandemic -- which also means that the United States will be represented by a more climate-friendly administration.

The incoming Biden administration has said it is willing to work on climate change with China despite other disagreements.

China, the world's largest carbon emitter, recently announced its aim to go carbon neutral by 2060 and denounced the United States as obstructionist.