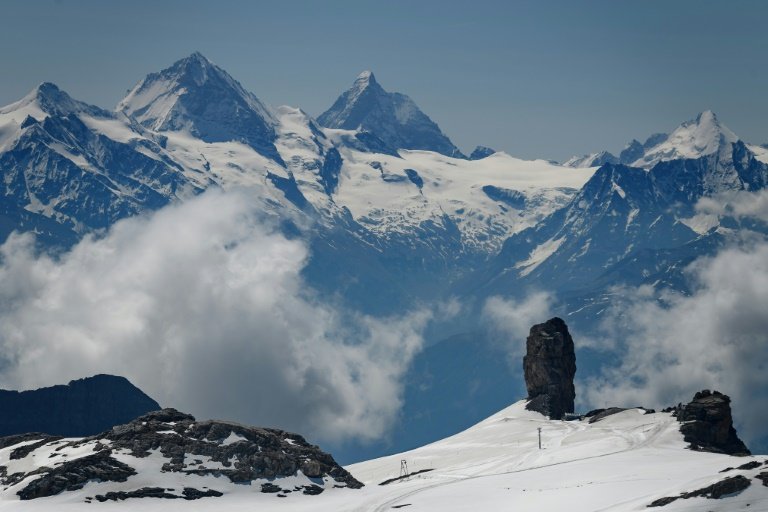 In the past 60 years, Swiss glaciers have lost enough water to fill the massive Lake Constance / © AFP/File

Swiss glaciers have continued to shrink at an alarming rate this year, while snow accumulation on the largest glacier in the Alps reached a record low, a study showed Friday.

Although 2020 has not been a year of extremes, the glaciers in the Swiss Alps are still in steady decline, losing a full two percent of their volume this year alone, according to an annual study on the state of the glaciers published by the Swiss Academies of Science.

That is in line with the average over the past 10 years, but the numbers are still "very concerning", report author Matthias Huss, in charge of the Glacier Monitoring Network (GLAMOS), told AFP.

"They are a bit lower than the last three years, when we had extremely high temperatures... but still the glaciers lost a lot of mass," he said, adding that a two percent loss per year "is really a lot."

In the past 60 years, Swiss glaciers have lost enough water to fill the massive Lake Constance, which straddles the Swiss-German-Austrian borders across 63 kilometres (40 miles), the report said.

The most concerning finding this year was perhaps that snow accumulation on the mighty Aletsch -- the largest glacier in the Alps -- hit its lowest level on record.

The measurement point, near the Jungfraujoch peak 3,466 metres above sea level, is so high up that it consistently shows the glacier gaining mass.

But since measurements began there more than a century ago, "this year it was the smallest ever snow accumulation," Huss said.

"It is cold up there, but there was very little snow that was retained even at this elevation, and this is of course a bad sign for the biggest glacier in the Alps."

The glacier, which covers 86 square kilometres (33 square miles) and is estimated to hold around 11 billion tonnes of ice, has already seen its tongue recede by about one kilometre since the turn of the century.

Aletsch is one of more than 4,000 glaciers -- vast, ancient reserves of ice -- dotted throughout the Alps, providing seasonal water to millions and forming some of Europe's most stunning landscapes.

In a study last year, the ETH technical university in Zurich published a study indicating that around 95 percent of those glaciers will disappear by 2100 if greenhouse gas emissions are left unchecked.

Even if the world were to step up and fully implement the 2015 Paris Agreement, which calls for capping global warming at well below two degrees Celsius, two-thirds of the Alpine glaciers will likely be lost, according to that forecast.

"But at least we would still have some glaciers left to admire," Huss said.