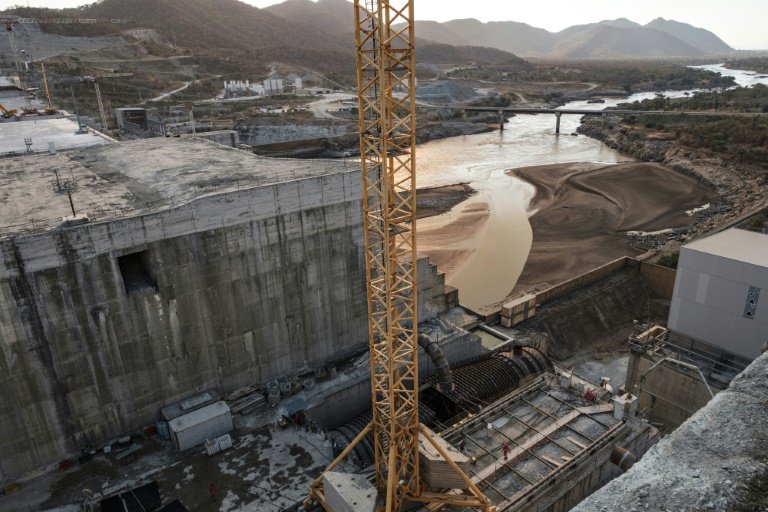 Cairo, Addis Ababa and Khartoum have failed to produce a deal, despite years of talks, over the filling of the Ethiopian dam / © AFP/File

As Egypt, Ethiopia and Sudan struggle to resolve a long-running dispute over Addis Ababa's mega-dam project on the Nile, some of their citizens are sparring online over their rights to the mighty waterway.

For nearly a decade, multiple rounds of talks between Cairo, Addis Ababa and Khartoum have failed to produce a deal over the filling and operation of the Grand Ethiopian Renaissance Dam (GERD).

Anxiety has mounted in downstream Sudan and Egypt, which fear for their vital water supplies after upstream Ethiopia declared plans to start filling Africa's largest dam reservoir in July.

As tensions have run high in the political arena, they have also amped up online.

In one widely viewed video originally shared on TikTok, an Ethiopian woman pours water from a pitcher into two cups representing Egypt and Sudan.

She fills Sudan's cup to the brim but only pours a trickle of water into Egypt's, before emptying the water back into the pitcher.

"This is my water. When I give you water, it's my call, not yours," she says.

In response, an Egyptian woman created a compilation of the video and one of her own in which she knocks down a dam-shaped block structure with the Ethiopian flag superimposed on it before triumphantly downing a cup of water.

The video had been viewed more than 55,000 times on Instagram by Wednesday.

"People on the social media platforms aren't accountable, so it's easy to disseminate unverified, incorrect, false, even conspiracy theories," he said.

But, he added hopefully, "when used creatively and judiciously, they can help defuse tensions".

The online row over the dam has been particularly heated between Egyptian and Ethiopian social media users.

Egypt has long enjoyed the lion's share of the Nile water under decades-old agreements that were largely viewed by other Nile basin countries as unfair.

On Twitter, Egyptians echoed authorities' fears that Ethiopia's dam would severely cut their country's supply of water from the Nile, which provides 97 percent of the arid nation's water needs. 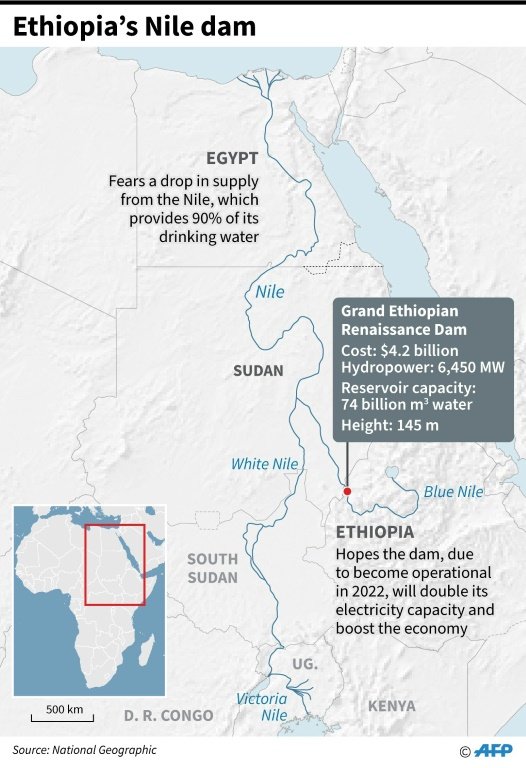 "We will never allow any country to starve us" of water, Egyptian billionaire Naguib Sawiris wrote on Twitter.

"If Ethiopia doesn't come to reason, we, the Egyptian people will be the first to call for war," he threatened.

Egyptian cartoonist Ahmed Diab has weighed in with a drawing of an outsized Egyptian soldier, rifle slung over his shoulder, facing a diminutive Ethiopian man with the dam in the background.

"You idiot, try to understand that I care for you... ever heard about the Bar Lev Line?" the soldier tells the Ethiopian, alluding to Egypt's military strength in referring to the Egyptian destruction of an Israeli defence line along the Suez canal in 1973.

Diab called the cartoon part of a "psychological war".

"Besides a show of military might and strong media discourse, arts can boost people's morale," he said.

For their part, Ethiopians have rallied behind their country's mega project, set to become Africa's largest hydroelectric installation.

On social media, they have rejected any conditions of reaching a deal before filling the dam.

Filling the dam should not be held "hostage" to an agreement with Cairo, Ethiopian activist Jawar Mohamed wrote on Twitter.

"If agreement is reached before the filling begins in the coming days, it's great. If not, the filling should begin and the negotiation shall continue," he said.

Ethiopia, one of Africa's fastest growing economies, insists the dam will not affect the onward flow of water and sees the project as indispensible for its national development and electrification.

Khartoum hopes the dam will help regulate flooding, but in June it warned that millions of lives will be at "great risk" if Ethiopia unilaterally fills the dam.

In a letter to the United Nations Security Council, Sudan raised concerns that water discharged from the GERD could "compromise the safety" of its own Roseires Dam by overwhelming it and causing flooding.

Last month, Egypt also appealed to the UNSC to intervene in the crisis -- a move Sisi said underlined his country's committment to a political solution.

Egyptian lawmaker Mohamed Fouad views the online debate as a way to "break the stalemate" in the diplomatic talks, "so long as they remain within the boundaries of healthy discussions".