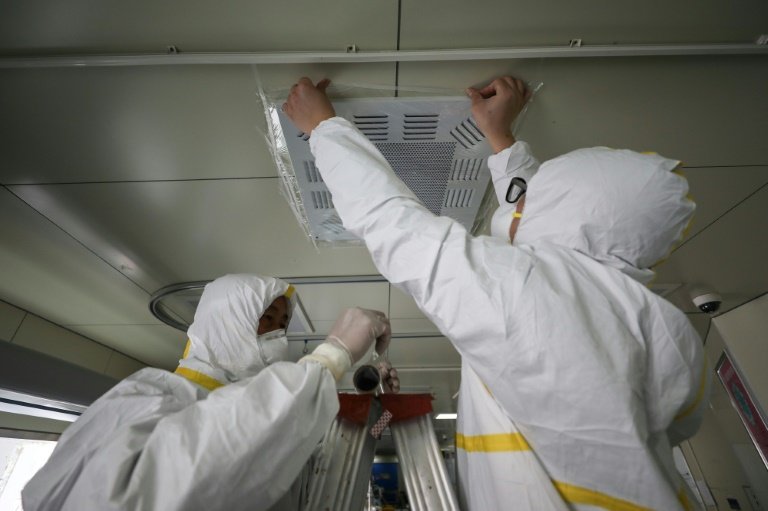 Medical staff seal a vent in what used to be an isolation ward for patients infected by the COVID-19 coronavirus at a hospital in Wuhan, China / © AFP/File

An international group of 239 scientists on Monday urged authorities including the World Health Organization to recognize that the coronavirus can spread in the air at distances well beyond two meters (six feet), and to revise their prevention guidelines accordingly.

As countries ease their lockdowns, authorities need to recognize the coronavirus can spread through the air far beyond the two meters (six feet) urged in social distancing guidelines, an international group of 239 scientists said Monday.

In a comment piece that takes direct aim at the World Health Organization for its reluctance to update its advice, researchers recommended new measures including increasing indoor ventilation, installing high-grade air filters and UV lamps, and preventing overcrowding in buildings and transport.

"There is significant potential for inhalation exposure to viruses in microscopic respiratory droplets (microdroplets) at short to medium distances (up to several meters, or room scale)," wrote the authors, led by Lidia Morawska of the Queensland University of Technology.

"Hand washing and social distancing are appropriate, but in our view, insufficient to provide protection from virus-carrying respiratory microdroplets released into the air by infected people."

When an infected person breathes, speaks, coughs or sneezes, they expel droplets of various sizes.

Those above five to ten micrometers -- which is less than the width of a typical human head hair -- fall to the ground in seconds and within a meter or two.

Droplets under this size can become suspended in the air in what is called an "aerosol," remaining aloft for several hours and traveling up to tens of meters.

There has been a debate in the scientific community about how infectious microdroplets are in the context of COVID-19.

For the time being the WHO advises that the potential for infection from an aerosol occurs "in specific circumstances" mainly in hospitals, for example when a tube is placed down a patient's airway.

On the other hand, some studies of particular spreading events suggest that aerosolization and microdroplet transmission can happen in a variety of settings.

The air flow from an air conditioning unit appeared to waft the coronavirus to several tables in a Chinese restaurant in January where patrons became infected, according to a study that appeared in Emerging Infectious Diseases.

Another study that appeared in a report by the Centers for Disease Control and Prevention indicated that the virus was spread by microdroplets from people singing during a choir practice in Washington state in March.

Fifty-three people fell ill at that event and two died.

That is in addition to the fact that bars jam-packed with people have also emerged as hotspots of contagion, with droplets of all sizes believed to contribute to the spread.

Cath Noakes, a professor of environmental engineering for buildings at the University of Leeds, who contributed to the paper, said COVID-19 doesn't spread in the air as easily as measles or tuberculosis, but is a threat nonetheless.

"COVID-19 is more likely to be 'opportunistically' airborne and therefore poses a risk to people who are in the same room for long periods of time," she added.

The WHO advice is out of step with both the US CDC and its European counterpart.

"We are aware of the article and are reviewing its contents with our technical experts," the WHO said in response to the new commentary.

"Following the precautionary principle, we must address every potentially important pathway to slow the spread of COVID-19," they wrote.

Put another way, "absence of evidence is not evidence of absence," said Julian Tang, an associate professor of respiratory sciences at the University of Leicester who contributed to the commentary.