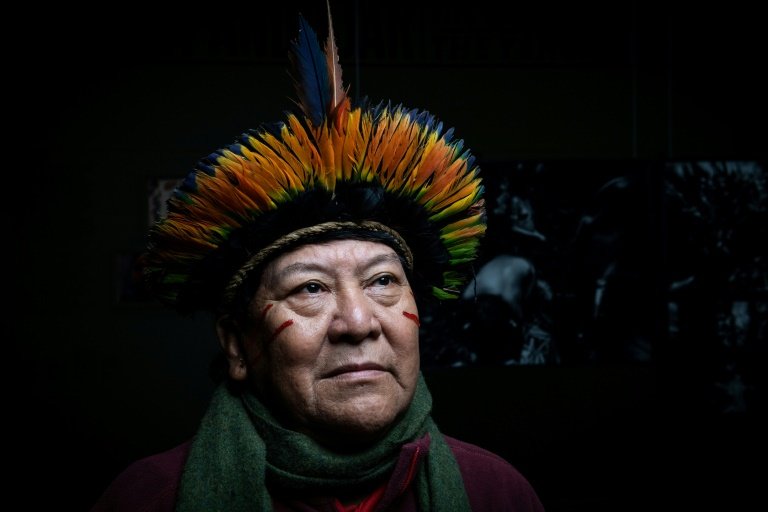 Davi Kopenawa Yanomami, spokesman for the Yanomami indigenous people of Brazil, at a conference in Paris on January 29, 2020 / © AFP

Brazil's Yanomami indigenous people on Tuesday demanded the government of President Jair Bolsonaro expel illegal goldminers from its territory to protect their communities from the spread of the coronavirus.

Three Yanomami people have died so far of COVID-19 and there are growing fears the pandemic could wipe out thousands of Brazil's 27,000 Yanomamis if they become widely exposed to the disease.

"The miners are entering the Yanomami indigenous land with COVID-19 contamination." said Dario Kopenawa, leader of the Hutukara Yanomami Association.

"It is a very serious situation for the Yanomami and that is why we are campaigning so that non-indigenous people worry about our situation. The coronavirus can kill many Yanomami," he said.

So far 76 communities have reported infections, with a total of 1,747 cases and 167 deaths, according to Brazil's association of indigenous peoples.

An online petition launched with the backing of Brazilian and international human rights organizations is seeking to gather 100,000 signatures to demand government action against the miners.

Organizations like Survival International and Brazilian indigenous rights group Instituto Socioambiental (ISA) estimate as many as 20,000 illegal miners are operating in Yanomami territory, an area in the Amazon of some 96,000 square kilometers (37,000 square miles).

Encroachment by illegal miners "is a recurring problem. But now with the pandemic it's urgent," said ISA researcher Antonio Oviedo.

A recent Minas Gerais University study showed that as many as 40 percent of Yanomami living close to mining areas risked becoming infected with the virus, Oviedo said.

The miners have become emboldened by the stance of right-wing President Jair Bolsonaro, who has defended the exploitation of indigenous lands.

"The political context is not at all favorable," said Oviedo.

"We have an Environment Minister (Ricardo Salles) who sees the pandemic as an opportunity to pass legislation that weakens environmental protection, but on the other hand, it is the responsibility of the State to stop this illegal and criminal activity."

Brazil, with more than 500,000 infections and almost 30,000 deaths, is the second worst hit country in the world after the United States.