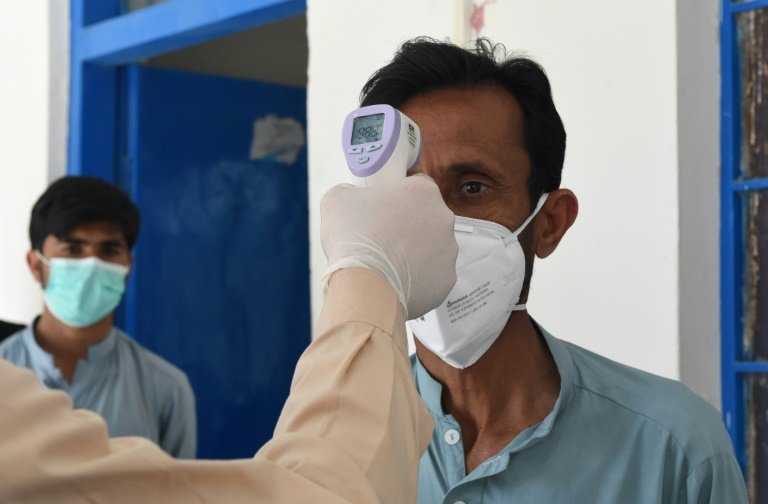 A doctor checks the body temperature of a man returning from Iran at a quarantine zone to test for the COVID-19 coronavirus in the Pakistan-Iran border town of Taftan on February 25, 2020 / © AFP

Under-reporting, competing recommendations on how long those infected should be isolated, doubts on detection tests -- the rapid climb in coronavirus cases outside China highlights weaknesses in the methods used to spot and track the deadly virus.

To stop the new coronavirus outbreak from becoming a full-blown pandemic, it is essential to locate and isolate infected individuals so they do not contaminate others.

But so far, according to researchers from Imperial College London working with the World Health Organization, the world has failed at that.

"We estimated that about two thirds of COVID-19 cases exported from mainland China have remained undetected worldwide, potentially resulting in multiple chains of as yet undetected human-to-human transmission outside mainland China," they said in a report Friday.

One of the problems posed by this virus is that "there is a whole range of clinical symptoms", including some no worse than a common cold, Daniel Levy-Bruhl, a researcher at France's public health agency, told AFP.

This means that people with few or faint symptoms can slip through the net undetected.

Another category even harder to spot are infected persons with no signs of the virus whatsoever. Scientists say these "asymptomatic" cases are probably a small minority.

"These individuals may help spread infections, but certainly less than someone who is coughing and sneezing," Levy-Bruhl said.

"Studies so far confirm that in the overwhelming majority of cases, it is people with symptoms who transmit the disease."

The incubation between the moment of infection and the onset of symptoms has been estimated in most studies to average about 10 days, leading to a recommended quarantine period of 14 days for possible or suspected cases.

But recently Chinese experts -- based on a relative handful of cases -- have concluded that the incubation time could extend 24 or even 27 days.

Other scientists have reacted to these findings with scepticism.

"Recent data suggests the contrary, that the incubation period is in fact shorter," Levy-Bruhl said. "There's very little chance that it is more than 14 days."

Even if it is longer, such cases remain "rare," noted Yazdan Yazdanpanah, an expert at the World Health Organization.

"An epidemic does not spread through the extreme cases, which are an aberration, but due to the overall profile," he added. "We have to focus on what is most common or frequent."

Last week in Japan, two Australians and an Israeli passenger from the cruise ship Diamond Princess tested positive upon arriving home for COVID-19, the disease caused by the 2019-nCoV virus.

But all three had allegedly tested negative before being allowed to disembark.

"The tests reliably detect the virus," raising questions about whether they were in fact properly applied or used at all in these cases, Yazdanpanah said.

Based on the genetic profile of the virus, samples must be examined by specialised laboratories, yielding results within a few hours.

"During the onset of the sickness, people expel a lot of viruses, so it's not a detector problem," Yazdanpanah added.

"Things get more complicated towards the end of the illness, when there's a higher risk of negative results," he said. "But that also means people are less contagious at that point, and have less impact on the epidemic."

- What if it keeps spreading? -

The strategy of trying to block the virus's spread is becoming less viable as more and more countries become reservoirs.

At some point, national health authorities may have to switch from blocking its progress to coping with its effects. 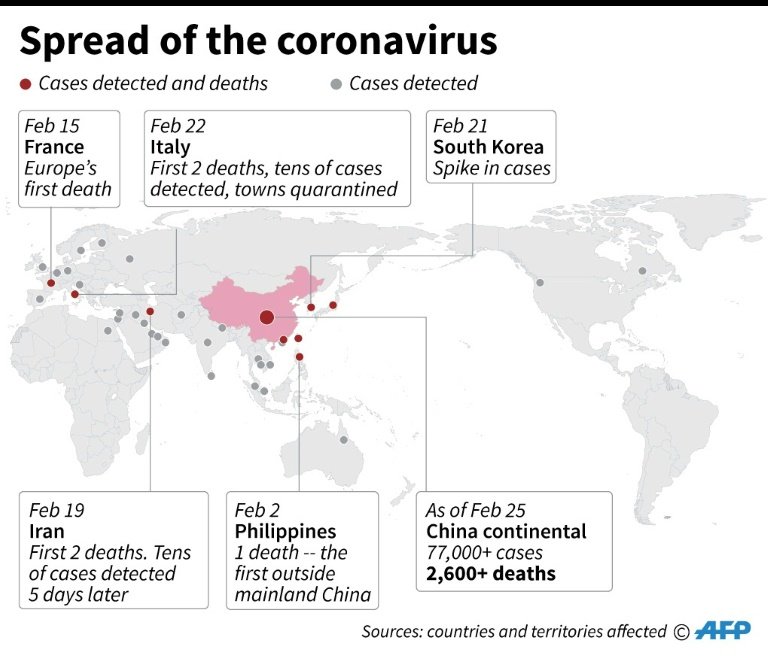 "In that case, we can't maintain the same approach of identifying and isolating all cases, because we won't have the resources," said Simon Cauchemez, an expert at the Institut Pasteur in Paris.

In developed countries, this could weigh heavily on health systems.

"Eighty-five percent of those infected do not have a severe form of the disease," Yazdanpanah noted. "But the ones that are serious are worse than the seasonal flu and would need to be hospitalised."

Problems arising from an outbreak become harder to cope with in a less developed setting.

Compared to the 2014-16 Ebola outbreak in west Africa, the new coronavirus is less deadly but harder to detect and thus stop.

"Even if only three percent of cases result in death, that can add up to a large number if 30 to 60 percent of the population is infected," said Cauchemez.