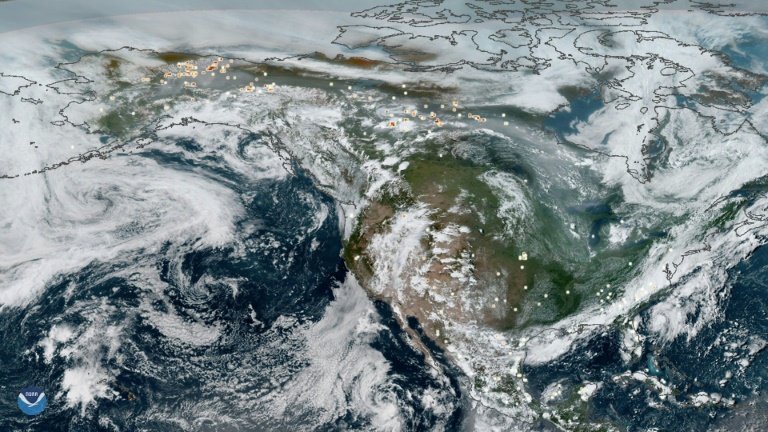 Satellite images of forest fires in Alaska and Canada on July 23, 2019 / © NASA/NOAA/AFP/File

A significant expansion of state, city, and business climate action could reduce US greenhouse gas emissions by up to 37 percent by 2030 over 2005 levels even without federal support, according to projections published Monday.

But the election of a president who advances a comprehensive national climate strategy could reduce emissions by 49 percent by 2030, around the levels UN experts deem a necessary stepping stone to meet the Paris accord goals needed to prevent runaway planetary warming.

The figures were compiled by America's Pledge, a group founded in 2017 and financed by billionaire Michael Bloomberg, who last month announced he was running to be the Democratic candidate for the 2020 US presidential election.

Climate change experts quoted in the report, from the University of Maryland and the Rocky Mountain Institute, estimate the US is presently set to reduce emissions by 25 percent by 2030 if sub-federal climate ambitions remain at their current levels.

The main factors are natural market forces, which are increasingly favoring renewable energies and disfavoring coal, as well as laws in Democratic-led states, notably California and New York.

The best case scenario however would involve the election of a Democratic president and congressional majority that would adopt a set of laws on the energy sector and on vehicles that would put the country on track to meet carbon neutrality by 2050.

Scientists deem that necessary to limit long-term warming at 1.5 or two degrees higher than pre-industrial levels.

"We do have time to catch up with the Paris goal, but we need to move very rapidly," Carl Pope, vice president of America's Pledge told reporters ahead of the report's presentation at the COP25 UN climate conference in Madrid on Monday.

"It does require revolutionary change, but that change is already happening," Pope added. "So we need federal reengagement, we ideally need it in 2021. But we shouldn't stop if we don't get it."

Under the US system of governance, states have the power to legislate against fossil fuel use in local energy production, and set standards for building insulation and heating.

But other important regulations remain under federal purview, including car emissions, aviation, shipping, oil pipelines, hydrocarbon drilling on federal lands, the federal energy sector and regulations for carbon-intensive industries such as cement and steel.

By comparison, the European Union is on track to significantly exceed its target of reducing emissions by 40 percent by 2030 compared to 1990, which is earlier than the reference year chosen by Washington of 2005.

Many European countries have called for the zone to adopt the goal of carbon neutrality by 2050.