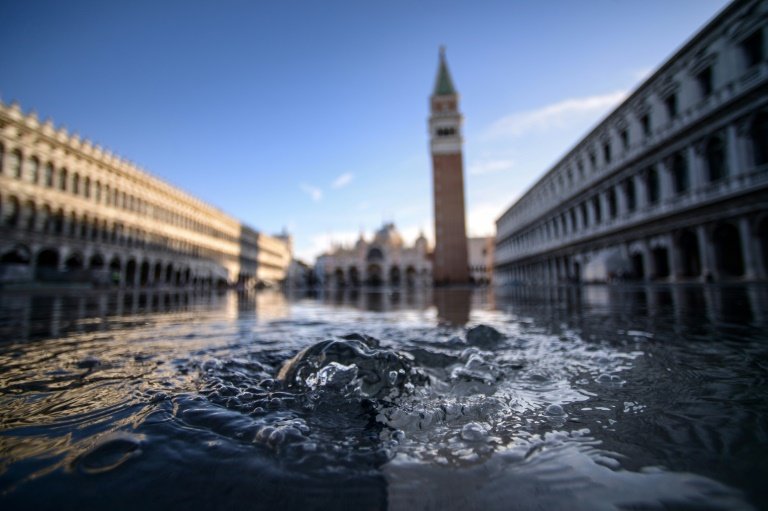 Another exceptional high tide swamped flood-hit Venice on Friday, prompting the mayor to order St Mark's square closed after Italy declared a state of emergency for the UNESCO city.

Luigi Brugnaro ordered the iconic square closed as the latest sea surge of around 1.6 metres (over five feet) struck and strong storms and winds battered the region -- lower than Tuesday's peak but still dangerous.

"I'm forced to close the square to avoid health risks for citizens... a disaster," Brugnaro said.

Churches, shops and homes in the city of canals have been inundated by unusually intense "acqua alta", or high water, which on Tuesday hit their highest level in half a century. 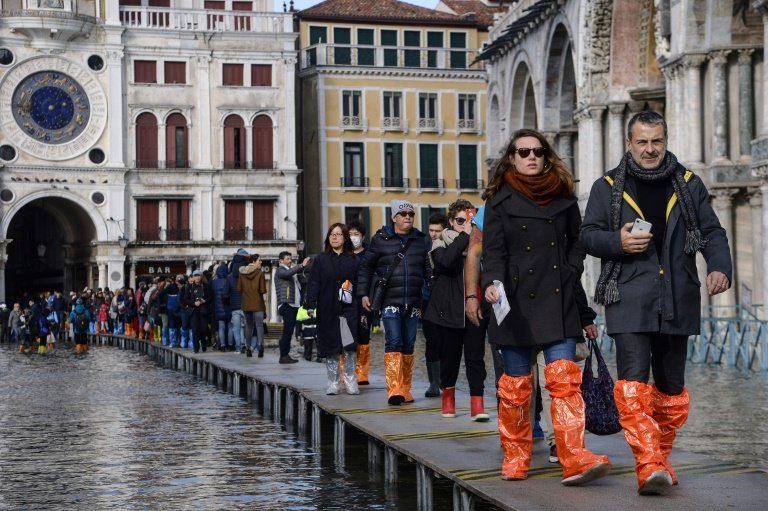 Undeterred by the crisis, tourists have been larking around in the flooded St Mark's Square / © AFP

"We've destroyed Venice, we're talking about one billion (euros) in damage and that's just from the other day, not today," Brugnaro said, as far-right leader Matteo Salvini joined the list of politicians to visit the stricken city.

The crisis, driven by bad weather, has prompted the government to release 20 million euros ($22 million) in funds to tackle the devastation.

Before it was closed, tourists had been larking around in the flooded St Mark's Square in the sunshine during breaks from the rain, snapping selfies in neon plastic boots.

Prime Minister Giuseppe Conte, who has called the flooding "a blow to the heart of our country", on Thursday declared the emergency.

He met Venice's mayor and emergency services on Thursday before jumping in a speed boat to visit businesses and locals affected by the tide. 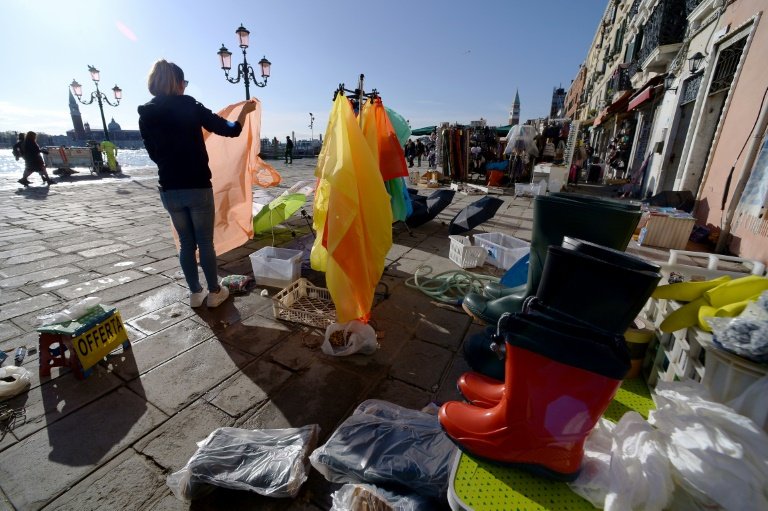 Residents whose houses had been hit would immediately get up to 5,000 euros in government aid, while restaurant and shop owners could receive up to 20,000 euros and apply for more later, he said.

Mayor Brugnaro also announced the opening of a bank account for people in Italy and around the world who want to contribute to the historic city's repair.

"Venice is everyone's heritage, unique in the world. Thanks to your help Venice will shine once more," he said in a statement.

As the authorities assessed the extent of the damage to Venice's cultural treasures, such as St Mark's Basilica where water invaded the crypt, locals were defiant. 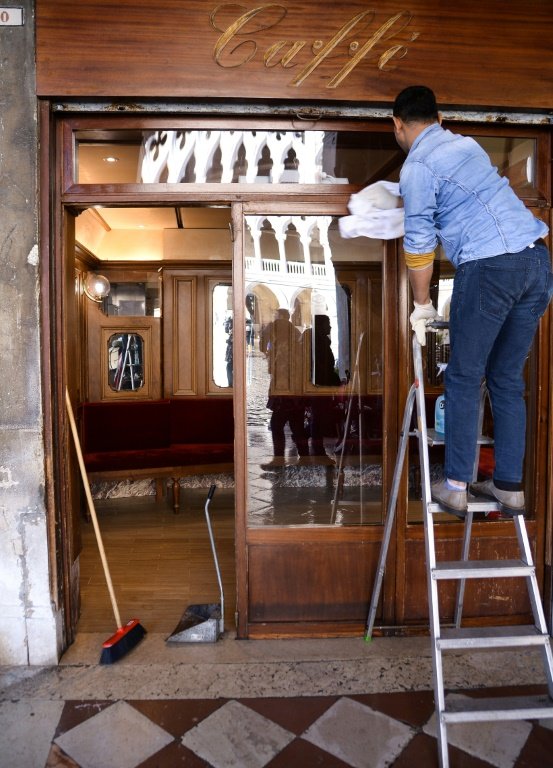 The flooding caused millions of euros worth of damage to the UNESCO city, according to officials / © AFP

Many stopped for their usual coffees at flooded bars, drinking espresso while standing in several inches of water.

"It's shocking to see this, having water up to your knees," said Mexican tourist Oscar Calzada, 19.

"You have to be here to believe it and hopefully it won't happen again, it'll only be once in a lifetime type thing."

The Locanda Al Leon hotel said bookings had suffered from the international media coverage of the flood, with some guests cancelling their rooms after seeing images of Venice underwater. 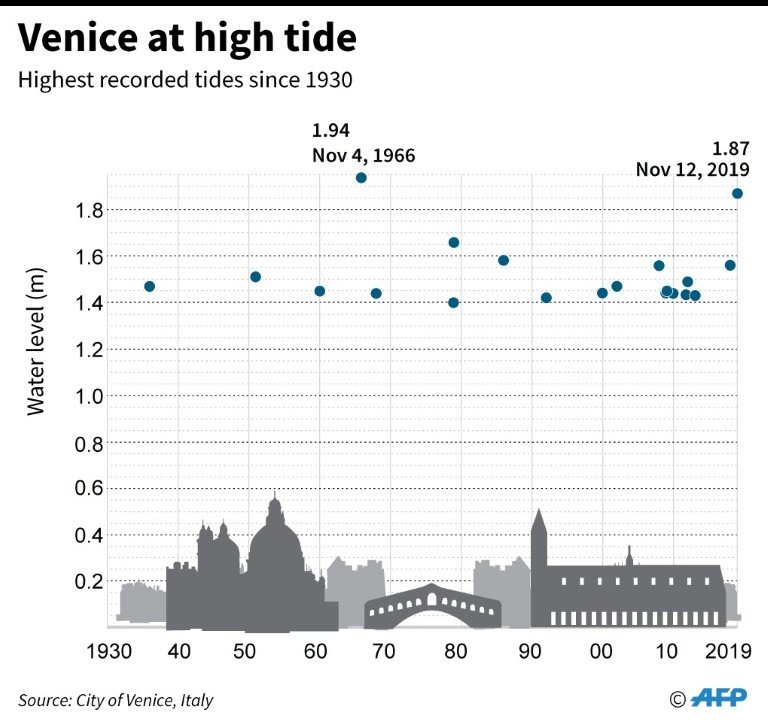 Like many of the city's cultural institutions, Venice's Guggenheim museum had planned to reopen on Friday but changed its mind "due to the significant worsening of the weather conditions".

"It makes me question what Venice is going to be like in 50 years," said California student David Melendez, 20. 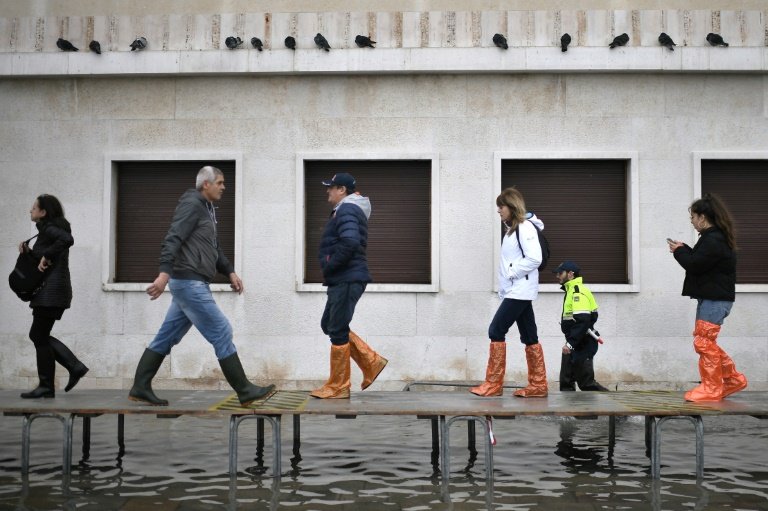 "Hopefully this beautiful city can survive and our sons and grandsons can see it."

Many, including Venice's mayor, have blamed the disaster on global warming and warned that Italy -- a country prone to natural disasters -- must wake up to the risks posed by ever more volatile seasons.

"We need to be resilient and adapt. We need a policy that looks at the climate through completely different eyes," Environment Minister Sergio Costa said Thursday.

The Serenissima, as the floating city is called, is home to a mere 50,000 residents but receives 36 million global visitors each year.

A massive infrastructure project has been under way since 2003 to protect the city, but it has been plagued by cost overruns, corruption scandals and delays.

The plan involves 78 gates that can be raised to protect Venice's lagoon during high tides -- but a recent attempt to test part of it caused worrying vibrations and engineers discovered it had rusted.