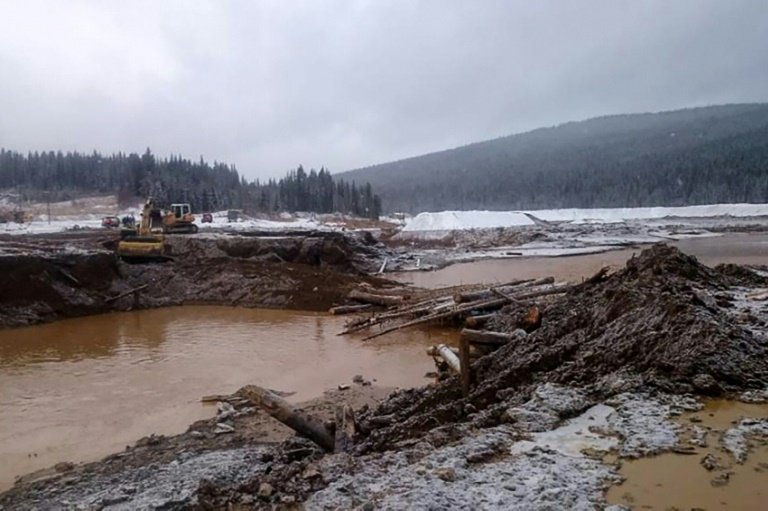 The dam's collapse unleashed a torrent of icy and muddy water, which engulfed the workers' huts / © RUSSIAN EMERGENCY SITUATIONS MINISTRY/AFP

Investigators said Sunday they had arrested several people after five illegally-built dams collapsed at a Siberian gold mine, killing 15 workers.

The workers died after dams at a remote site in the Krasnoyarsk region collapsed at the artisanal gold mine on Saturday, unleashing a torrent of icy water that flooded cabins where they lived.

Investigators said the director of the gold mining company, Sisim, and the manager and foreman of the mining site had been arrested.

They have been taken to the city of Krasnoyarsk for questioning, investigators said, while adding that the company's offices had been searched as well.

The Investigative Committee cited results of the investigation in saying that five dams -- and not one as previously reported -- had been illegally constructed in the area, and all had collapsed.

"It was established that the dams had been built illegally without any permits," investigators said.

The site manager told investigators he had understood the danger of building a settlement in the area.

The foreman in charge of organising work at the site had not received proper training, investigators added.

Five people were still listed missing Sunday after the whereabouts of a sixth was established, a Krasnoyarsk-based spokeswoman for the emergencies ministry, Alyona Aleksishina, told AFP.

A search operation continued Sunday but bad weather prevented the use of aviation, Aleksishina said.

"It's snowing right now," she noted.

Mining violations were being considered the lead cause of the accident, the Committee said.

Officials had earlier claimed that authorities were not even aware of the dam's existence.

The tragedy drew fresh attention to mining practices in Russia, which holds some of the largest gold reserves in the world.