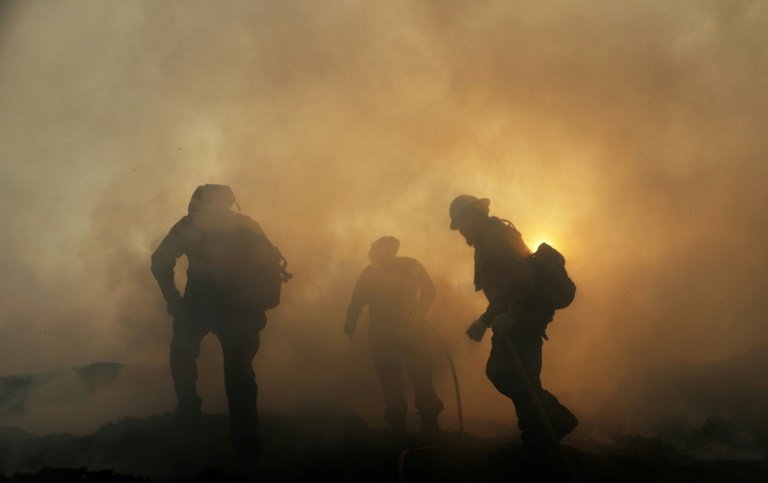 About 1,000 firefighters, backed by water-dropping helicopters and planes releasing fire retardants, fought a southern California wildfire, which began in the city of Sylmar, that forced the shutdown of several major highways / © Getty/AFP/File

Wildfires raging across southern California showed signs of slowing Sunday, as firefighters contained nearly half of the biggest blaze.

A fire that had burned rapidly through the San Fernando Valley in greater Los Angeles was the strongest of several across southern California.

Evacuation orders were lifted Saturday after 100,000 people were forced to flee their homes.

Cooler temperatures and lighter winds over the weekend improved the outlook, and residents were allowed to return.

One man in his 50s died of a heart attack as he struggled to save his home, fire officials said.

The fire broke out Thursday night and quickly grew out of control in the city of Sylmar, driven by low humidity and gusts known as the Santa Ana winds.

About 1,000 firefighters, backed by water-dropping helicopters and planes releasing fire retardants, fought the blaze that forced the shutdown of several major highways.

The metro line in the area was also closed, as were schools and businesses.

The blaze destroyed 76 homes and buildings, and killed an 89-year-old woman who was unable to escape the flames.

The shutoffs were designed to reduce the threat of wildfire that can be sparked by lines downed in heavy winds.