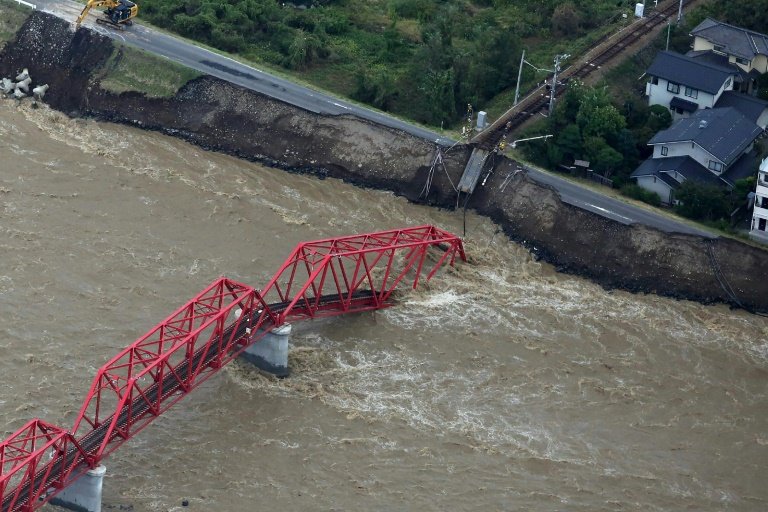 The Chikuma river, heavily swollen by rain from Typhoon Hagibis, swept away part of a train bridge in Ueda, in Japan's Nagano prefecture / © JIJI PRESS/AFP

Tens of thousands of rescuers worked through the pre-dawn hours Monday to reach people trapped by landslides and floods in Japan caused by a powerful typhoon that has killed up to 35, officials and local media said.

Typhoon Hagibis moved away from land on Sunday morning, but while it largely spared the capital, it left a trail of destruction in surrounding regions.

More than 100,000 rescuers -- including 31,000 troops -- clawed through debris overnight Sunday to Monday to reach people trapped after torrential rain caused landslides and filled rivers until they burst their banks.

The destruction forced the Rugby World Cup being hosted by Japan to cancel several games, but the "Brave Blossoms", as the national team is known, lifted spirits with a stunning 28-21 victory over Scotland Sunday that puts them into the quarter-finals of the tournament for the first time. 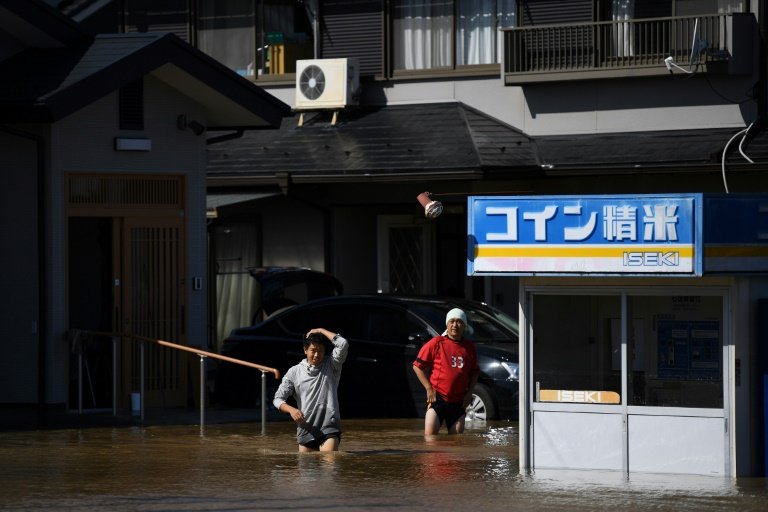 The government put the death toll at 14, with 11 people missing, but local media said at least 35 people had been killed, and at least 11 were still unaccounted for.

Rivers overflowed their banks at close to dozen locations -- including in central Japan's Nagano, where a levee breach sent water from the Chikuma river gushing into residential neighbourhoods, flooding homes up to the second floor.

Military and fire department helicopters winched survivors from roofs and balconies in several locations, but in Fukushima one rescue went tragically awry when a woman died after falling from a chopper cradle.

Elsewhere, rescue workers carried out an hours-long boat operation to evacuate hundreds of people from a retirement home in Kawagoe, northwest of Tokyo, which was flooded up to its top floor. 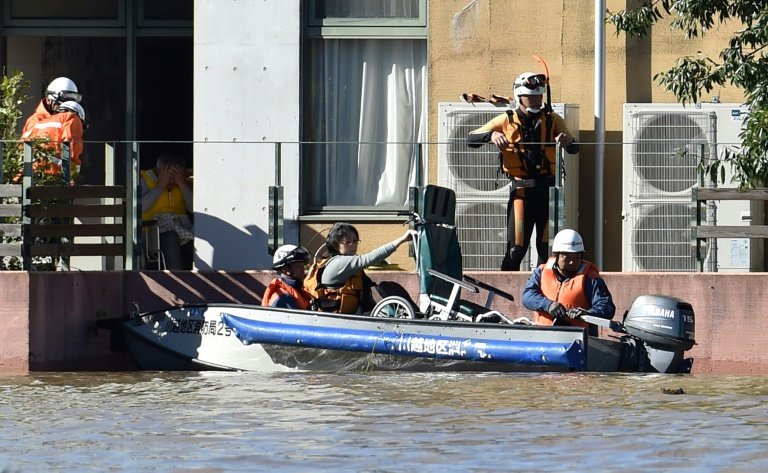 One elderly woman wearing an orange life vest was brought out from a boat on the back of a hard-hat wearing rescuer. Others were hoisted onto wheelchairs and pushed along a muddy shore on arrival by boat.

Hagibis smashed into the main Japanese island of Honshu on Saturday night as one of the most violent typhoons in recent years, with wind gusts of up to 216 kilometres (134 miles) per hour.

The storm claimed its first victim even before making landfall, when high winds flipped a vehicle, killing its driver. 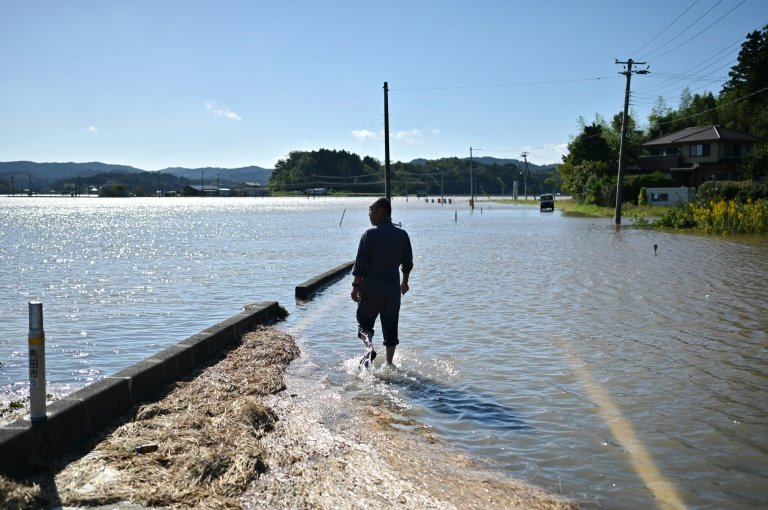 Typhoon Hagibis left a trail of destruction in its wake / © AFP

Landslides and flooding took more lives overnight, and the toll climbed higher after sunrise on Sunday, as the scale of the devastation wrought by Hagibis became clear.

Bodies were retrieved from submerged homes and vehicles, from raging overflowing rivers, and from buildings buried in landslides.

The dead included a municipal worker whose car was overcome by floodwaters and two Chinese crew members aboard a boat that sank overnight in Tokyo Bay.

Four of the crew were rescued, but authorities were still searching for another six.

"The government will do its utmost," Prime Minister Shinzo Abe said. 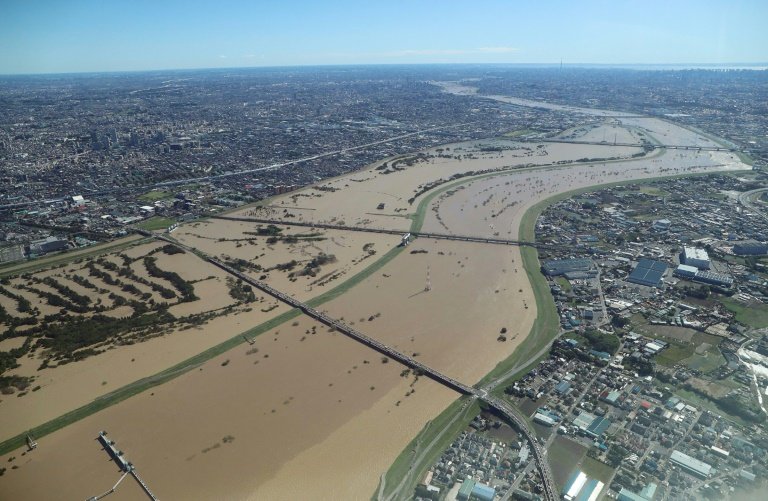 "Please do your best," he told a disaster management meeting.

More than 110,000 homes were still without power by Sunday evening, with others experiencing water outages.

At the storm's peak, more than seven million people were placed under non-compulsory evacuation orders.

"The water came up higher than my head in the house," Hajime Tokuda, a finance professional living in Kawasaki near Tokyo told AFP. 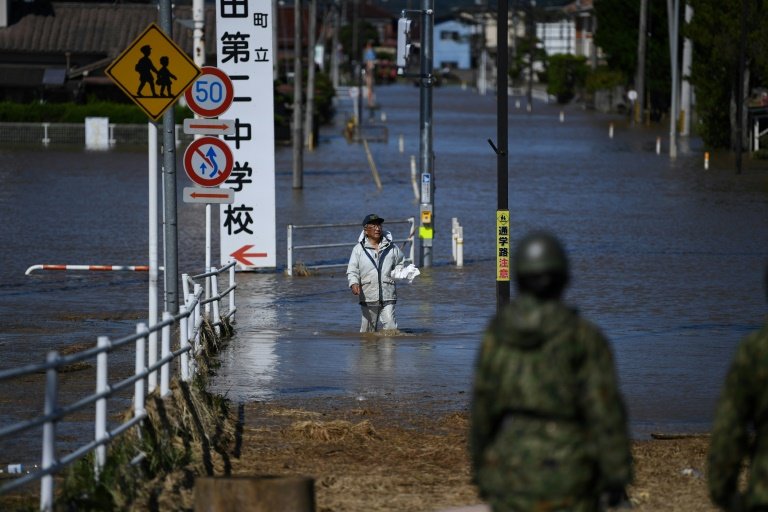 He moved to his family's home nearby, but that flooded too and they had to be rescued by boat.

"We never had a flood like this before in this neighbourhood," said one farmer, who declined to give his name.

"I don't know where to start cleaning this mess." 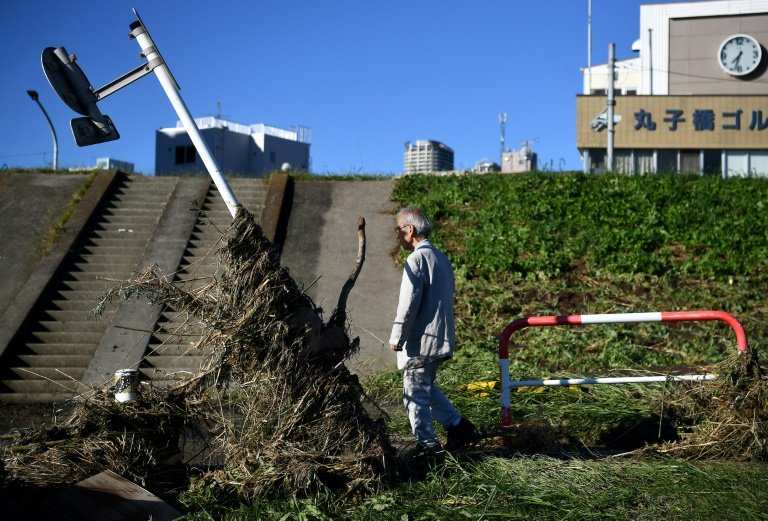 On Sunday, train services began resuming and operations also slowly restarted at the two airports serving the capital, although many flights were cancelled.

But some lines remained halted, with aerial footage in Nagano showing rows of bullet trains partially submerged by flooding. 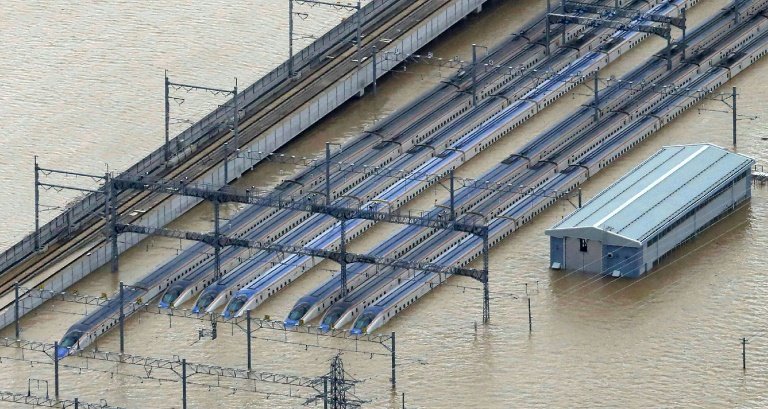 But a crucial decider saw the home team reach the World Cup quarter-finals for the first time ever.

"To everyone that's suffering from the typhoon, this game was for you guys," said Japan captain Michael Leitch.

UN Secretary General Antonio Guterres on Sunday said that he was "saddened by reports of loss of life and extensive destruction" caused by Hagibis, and extended his "deep condolences to the families of the victims."