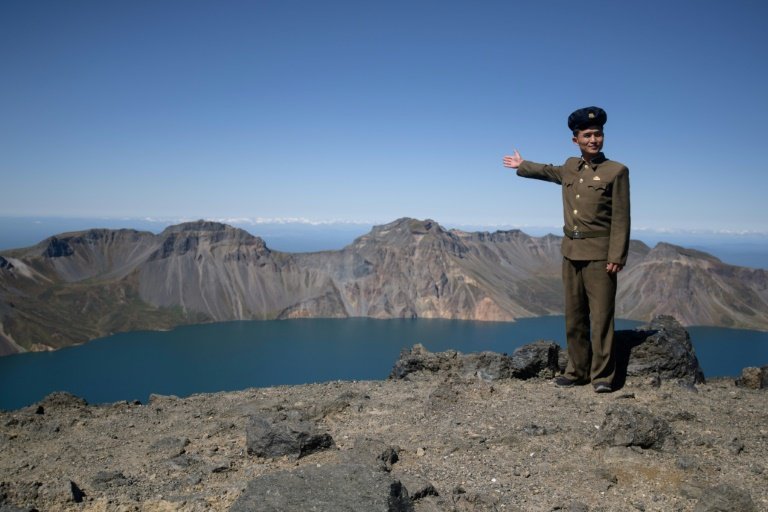 The eruption of Mount Paektu in 946 left behind a spectacular caldera, with steep walls plunging down to the shores of Chonji crater lake -- Heaven Lake in English / © AFP

North Korea has carried out six nuclear tests, but by far the greatest explosion ever seen on the peninsula took place more than 1,000 years ago and created the stark, serene beauty of Mount Paektu.

The volcano that now straddles the border with China erupted in 946 AD with apocalyptic fire and fury in what scientists consider one of the five largest volcanic events in human history.

Bigger than Krakatoa in 1883, it ejected enough material to bury Greater London to a depth of 60 metres (200 feet), and caused temporary climate change in the region.

Material from the blast has been found in ice cores from Greenland, on the other side of the world.

It left behind a spectacular caldera, with steep walls plunging down from the rim to the shores of Chonji crater lake -- Heaven Lake in English -- with the China frontier running through its placid blue waters.

Made up of rainwater and snowmelt, it is the source of the two rivers that form the border, the Tumen running to the northeast and the Amnok to the southwest, known as the Yalu in China, where the mountain is called Changbaishan.

The vista is one of the most emblematic in the North and one of the most common settings for portraits of the country's founder Kim Il Sung and his son and successor Kim Jong Il.

An image of it also forms the backdrop for their statues on Mansu hill in Pyongyang, where they look out over the capital.

It appears on both the 2,000 and 1,000 won banknotes and is ubiquitous in imagery from propaganda to bus shelters.

At 2,750 metres (around 9,000 feet), the volcano is also considered the spiritual birthplace of the Korean people -- the nation's mythological founder is said to have been born there, the son of a god and a bear that became a woman.

As such it has deep significance on both sides of the Demilitarized Zone that divides the peninsula.

It is mentioned in the national anthems of both Pyongyang and Seoul and the North's leader Kim Jong Un took the South's President Moon Jae-in to see it a year ago during their Pyongyang summit, although there is no memorial on site to mark the visit.

No-one knows how many people were killed in the 946 eruption, but Mount Paektu is considered dormant rather than extinct.

In the early 2000s, hundreds of small earthquakes shook through the mountain and it changed shape as magma rose through the layers of rock, pushing the surface outwards.

"There's recent signs of unrest. There's signs of life," says Birbeck College's James Hammond, one of the first Western scientists to study the mountain from the North Korean side. 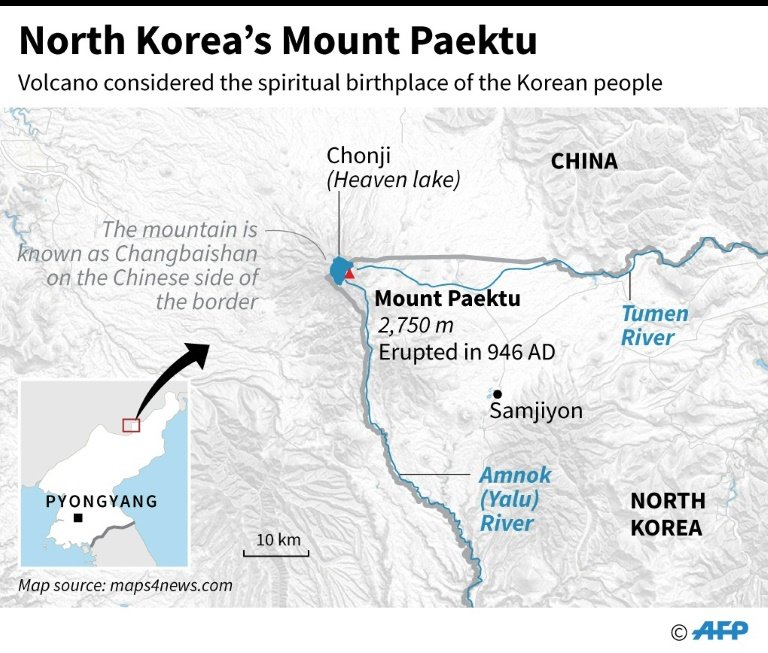 His research -- a joint effort with North Korean scientists -- has been complicated by both Pyongyang's isolation and the international sanctions imposed on it over its nuclear programme.

He was unable to take in equipment to measure the earth's conductivity as it has similar capabilities to technology used in submarine detection, so fell foul of restrictions on dual-use items that have both civilian and military applications.

Some commentators have raised fears that nuclear blasts at the North's atomic test site at Punggye-ri, more than 100 kilometres (60 miles) from Paektu, could trigger an eruption, but specialists at the respected 38 North website dismiss the possibility as "extremely remote".

According to local officials, the mountain is now quiet.

"We need to understand that frequency. We just don't know, so we can't say what it might do in future."