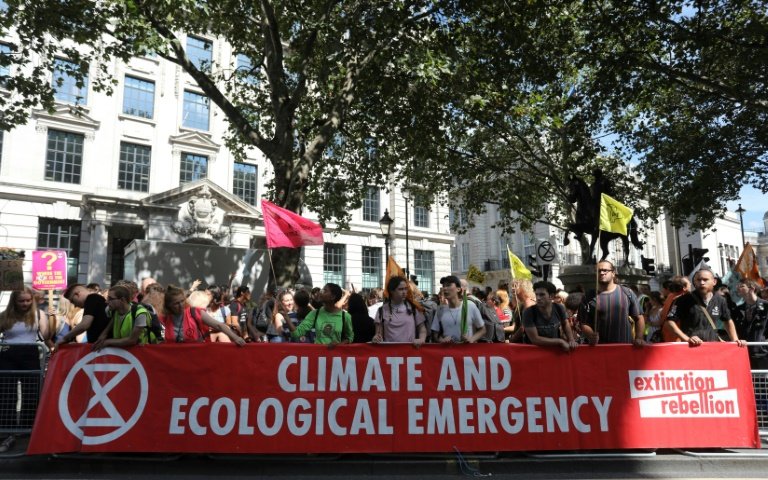 Climate change activists chanting slogans and waving banners demonstrated boisterously outside Brazil's embassy in London on Friday, urging President Jair Bolsonaro to do more to halt the fires in the Amazon rainforest.

Climate change activists chanting slogans and waving banners demonstrated outside Brazil's embassy in London on Friday, urging President Jair Bolsonaro to do more to halt the fires in the Amazon rainforest.

The protests came as British Prime Minister Boris Johnson described the fires as an "international crisis" ahead of a G7 summit in France this weekend where the issue is expected to feature prominently.

"The fires ravaging the Amazon rainforest are not only heartbreaking, they are an international crisis," Johnson tweeted.

"We stand ready to provide whatever help we can to bring them under control and help protect one of Earth's greatest wonders," he added.

Several hundred people gathered opposite the central London embassy, unfurling signs reading "Stop Destruction Now", "Save Our Planet" and "I Want You To Panic".

The demonstrators chanted "climate justice" and "save the Amazon" as a drummer played and young children drew rainbows and other images on the pavement with coloured chalk.

"We want to do something to stand in solidarity with people of Brazil," English teacher Luisa Steward, 36, told AFP.

"Also, we have children and would like for them to grow up in a world which has its lungs."

In Amsterdam several hundred protesters briefly staged a so-called "die-in" lying down in a central square as part of the "Fridays for Future" environmental protest movement started by Swedish teenage activist Greta Thunberg.

Meanwhile in Dublin around 100 activists from the Extinction Rebellion pressure group occupied the lobby of the building housing the Brazilian embassy, chanting and holding up protest placards.

Protests over the fires were also planned for other European cities, including a Friday night vigil and demonstrations Saturday and Monday in Lisbon under the slogan "Rebel for the Amazon".

Brazilian embassies in Berlin and Madrid, the consulate in Barcelona, and in Turin, northern Italy, were also set to be targeted.

"We are losing the lungs of our planet," Aitor Urruticoechea, spokesperson of Fridays for Future in Barcelona, told AFP.

Official figures show nearly 73,000 forest fires were recorded in Brazil in the first eight months of this year -- the highest number for any year since 2013. Most were in the Amazon.

The data comes as Bolsonaro, who took office on January 1, faces a growing worldwide clamour over his anti-environment rhetoric, which activists blame for emboldening loggers, miners and farmers in the Amazon.

The extent of the area damaged by fires has yet to be determined.

French President Emmanuel Macron stepped up his criticism of the situation Friday, saying he believes Bolsonaro lied to him on Brazil's stance on climate change.

He added France will now block a trade deal, recently finalised between the European Union and South American nations but yet to be ratified by member states, unless more action is taken.

"We gather in outrage, in grief and in despair," Extinction Rebellion said in calling the London protest.

"The Amazon is literally on fire and every inch that continues to burn takes us further away from any hope of sustaining life on this Earth.

"We cannot sit in silence while life on Earth is being destroyed." 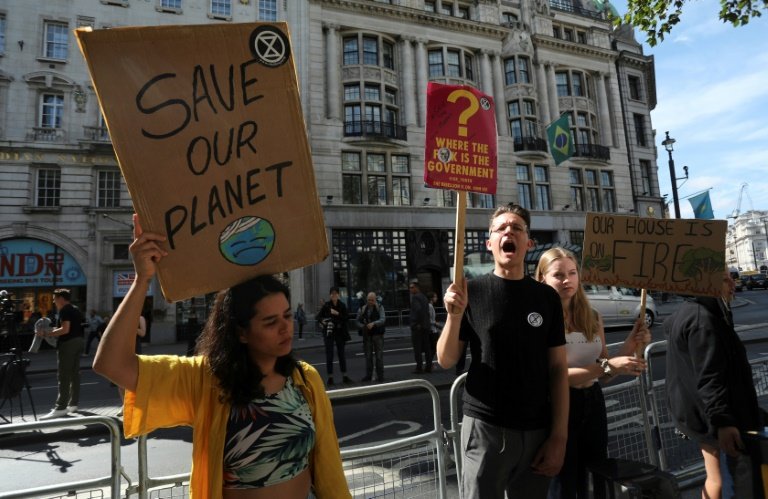 Official figures show nearly 73,000 forest fires were recorded in Brazil in the first eight months of this year -- the highest number for any year since 2013. Most were in the Amazon. / © AFP

They called on governments to put pressure on Bolsonaro to act to help stop the fires.

"I'm very concerned about climate change but specially about the impact of the animal agriculture in the Amazon," the ER member said.