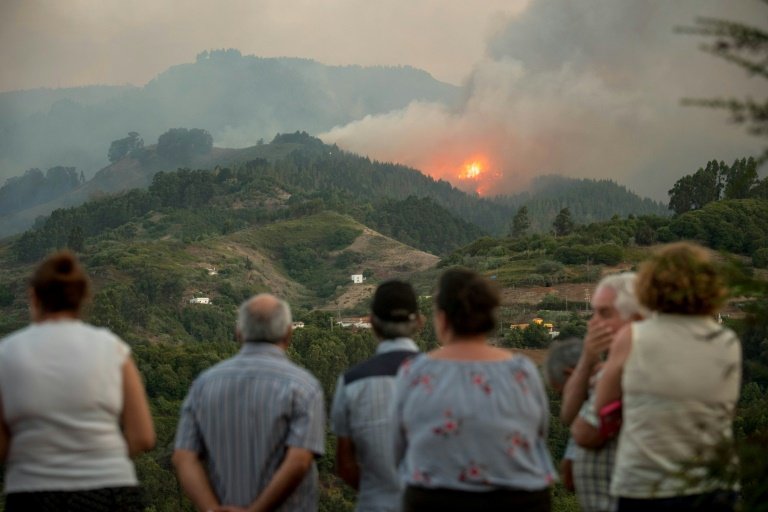 Most residents in the Spanish holiday island of Gran Canaria who were evacuated over a raging wildfire were able to return home Wednesday after firefighters aided by cooler temperatures and calmer winds managed to stabilise the blaze, local officials said.

Flames as high as 50 metres (160 feet) had complicated the battle against the blaze burning since Saturday on the western slopes of the volcanic island located off northwest Africa, prompting the evacuation of several villages with a combined population of around 10,000.

But as winds and temperatures fell, the fire started to subside.

"It is stabilised. Weather conditions were good with low temperatures and higher humidity. If everything goes well in a couple of days it will be controlled," Federico Grillo, emergency services chief on the island, told reporters.

But he cautioned that temperatures were set to rise again in the coming days and air humidity levels will drop which could rekindle the blaze, Spain's worst wildfire this year.

"We still can't guarantee that the fire does not have the potential to restart. We can't lower our guard," he said.

On Tuesday evening, some residents had already been allowed to go home as firefighters were subduing the powerful blaze, and so far some 7,500 people have returned, said Julio Perez, the security councillor with the regional government of the Canary Islands archipelago.

The cause of the fire, which at one point threatened to destroy protected natural reserves rich in biodiversity, is not yet known as rescuers have been unable to access the area where it started.

Spanish Prime Minister Pedro Sanchez will on Thursday travel to Gran Canaria, which has been hit by three fires in just two weeks that have ravaged some 12,000 hectares (30,000 acres) of land.

Tourism on Gran Canaria has not been affected as it is concentrated on the island's coasts.