Three orcas were loaded onto trucks at a controversial facility in Russia's Far East on Thursday as the country continues to release animals from what the media have dubbed a "whale jail".

The secluded facility near the port town of Nakhodka contains dozens of orcas and beluga whales which were caught to be sent to aquariums, but are now being set free after a global outcry and intervention by President Vladimir Putin.

Last month two orcas, also known as killer whales, and six belugas were released after a six-day trip north to their original habitat in the Sea of Okhotsk. They were first driven in trucks with a police escort and then shipped on a barge.

The three whales loaded onto trucks on Thursday, one male and two females, are expected to be released following a similar journey.

An AFP correspondent at the scene observed employees removing the transparent roof of the floating dock housing the killer whale pens.

Divers could be seen going into the pens and using nets to move the animals onto fabric stretchers with holes cut for their flippers.

The animals were then lifted and lowered into containers of water on three trucks. 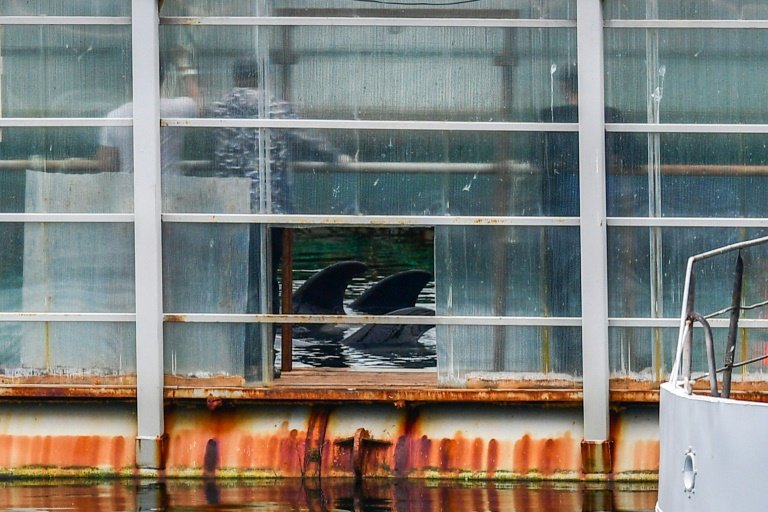 The remaining orcas and beluga whales could be heard vocalising loudly during the procedure and splashed their tails against the water -- a sign of agitation.

Journalists were not permitted to enter the loading area. Environmentalists and marine mammal experts have complained that the previous release took place with no independent oversight.

No observers were invited to the loading on Thursday, said Dmitry Lisitsyn, coordinator of Sakhalin Environmental Watch, a group which has campaigned for the release of wild orcas and successfully sued over Russia's practice of catching the animals.

"We insist on letting members of the public, independent experts and media observe the second transport and release," Roman Vazhenkov of Greenpeace Russia said Thursday in a statement.

In a statement on Wednesday, the All-Russian Fisheries and Oceanography Institute (VNIRO) which is overseeing the release, said the three orcas include two older orcas and one very young female.

"They are not members of the same family but have displayed clear affection toward each other," it said. The makeup of the group will "increase the chances of a successful return to the wild," where the older orcas can teach the younger one to hunt.

Russia is the only country capturing wild orcas and belugas and selling them to aquariums, a controversial practice that has continued due to legal loopholes.

The controversy came to a head when images of what the media have nicknamed the "whale jail" were published this year.

Scientists have advised that all 10 killer whales held in the facility be released together as a group because they have formed relationships in the months since their capture and the older ones could teach the youngest how to hunt.

VNIRO has said the cost of such a massive operation would be prohibitive.

Scientists have advised Russia to release them in the summer, which would make transportation far easier and possibly allow killer whales to find the families from which they were captured before they migrate to warmer waters.