Money going into new upstream oil and gas projects -- mostly exploration and drilling -- rose four percent in 2018, while investment in new renewable power of all kinds dipped by about two percent / © AFP/File

The world must double spending on renewable power and slash investment in oil and coal by 2030 to keep the Paris climate treaty temperature targets in play, the International Energy Agency (IEA) said Tuesday.

For that to happen, however, trend lines on both fronts moved in the wrong direction last year, the agency reported in its 4th annual World Energy Investment overview.

Money going into new upstream oil and gas projects -- exploration, drilling and infrastructure -- rose four percent in 2018, while investment in new coal sources went up by two percent, the first increase in that sector since 2012.

At the same time, investment in new renewable power of all kinds dipped by about two percent.

In total, global energy investment in 2018 -- split across the fuel supply and electric power sectors -- totalled $1.85 trillion, about the same as in 2017, the IEA reported.

This two-year plateau following three years of slow decline reflects uncertainty across the industry as to what the future holds.

"Governments have not clearly committed, nor have they clearly not committed, to reaching the Paris Agreement goals," Mike Waldron, an IEA energy investment analyst, told journalists ahead of the report's release.

A landmark UN report in October concluded that CO2 emissions must drop 45 percent by 2030 -- and reach "net zero" by 2050 -- if the rise in Earth's temperature is to be checked at the safer limit of 1.5C.

The planet's surface has already warmed 1C since industrialisation began, and is on track to heat up another 3C by century's end -- a recipe for human misery on a global scale, scientists say.

The lack of clear policy direction on climate change has steered energy investors towards projects with shorter lead times, and could contribute to a future gap between supply and demand, according to the report.

On current trends, money going to develop all types of energy -- especially oil, gas and coal -- will fail to meet projected global energy needs over then next decade, it found.

"Whichever way you look, we are storing up for risks in the future."

Under the New Policies Scenario, current patterns of investment continue on a similar trajectory, adjusted for voluntary national carbon-cutting plans that would -- if fulfilled -- see the planet warm by just under 3C above pre-industrial levels within 80 years.

The Sustainable Development Scenario "is fully aligned with the Paris Agreement," according to the IEA.

Low-carbon energy investment -- in solar, wind, efficiency, and carbon-storing technologies -- would need to double from $304 billion in 2018 to $606 billion over the next decade to be in sync with the more ambitious pathway, the IEA told AFP.

"The share of low-carbon investment rises to 65 percent by 2030, but advancing from today's share of 35 percent would require a step-change in policy focus," the report said.

Money to develop nuclear power would likewise have to increase sharply, from $47 billion last year to about $76 billion.

Investment in boosting electricity networks and battery storage would see a jump of more than 50 percent to $464 billion.

More broadly, "reaching the goal of the sustainable development scenario would require a major reallocation from fuel supply to [electric] power, which is not happening right now," said Tim Gould, head of the IEA's World Energy Outlook & Investment Division. 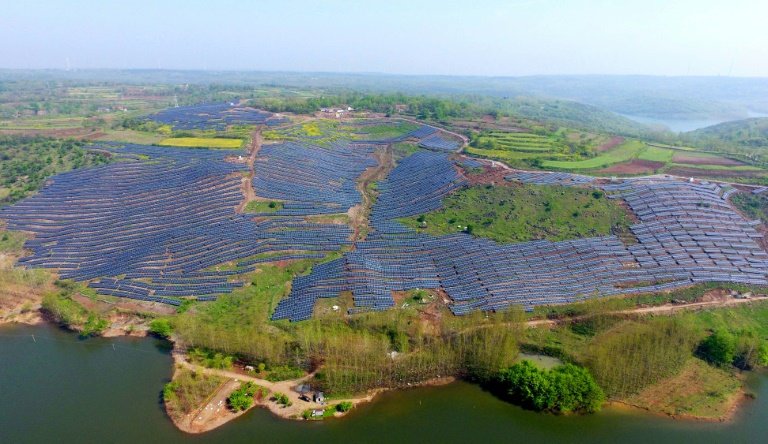 Solar photovoltaic modules on a hillside in a village in Chuzhou, in eastern China's Anhui province / © AFP/File

At a country level, China continued to be the largest market for energy investment in 2018, but its lead narrowed.

India had the second largest jump in investment after the United States.

The poorest regions of the world, however, continue to see a disproportionate lack of money for new energy of any kind.

Sub-Saharan Africa, for example, "only received around 15 percent of investment in 2018 even though it accounts for 40 percent of the global population," the IEA said.