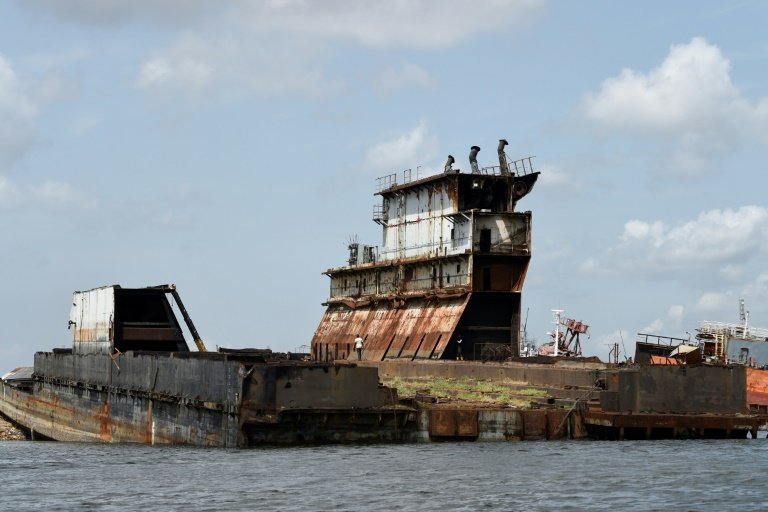 The two men in the motorised wooden canoe look around warily as they leave a towering shipwreck in the Lagos lagoon, with the barrels of oil on board barely concealed under rags.

The two men in the motorised wooden canoe look around warily as they leave a towering shipwreck in the Lagos lagoon, with the barrels of oil on board barely concealed under rags.

The rusting hulk of iron and peeling paint has been battered by the elements and is half submerged in the water. Sprouts of green shoots on deck indicate how long it has been abandoned.

But on closer inspection, the wreck is a working storage facility for stolen or "bunkered" oil, as it is known in Nigeria.

"Oladele", a 30-year-old who did not want to publicise his real name, has plied the waters on his boat since he was 15.

He says it's not the only wreck that stores illegally imported oil brought into the port by the huge tankers delivering petrol and gas, then sold on in neighbouring Benin and Togo.

"We will store them in the tanks, deep inside the wrecks, then at night usually, it will be picked up."

Scores of shipwrecks in Lagos' waterways, coastal waters and on the shores of its beaches have turned parts of its shoreline into a marine cemetery.

In Kiri-Kiri, the lagoon corridor, scores of wrecks and discarded ship scrap provide useful cover to hide illicit goods and barrels of oil and gas.

From there, the waters offer an easy route up the Lagos coast to Benin and beyond. Expensive scrap metal culled from unmanned wrecks can be sold for thousands of dollars.

But a lack of fully functioning refineries means crude is exported, processed and then imported for use.

Much of it is shipped through the narrow marine corridor into Lagos. Hundreds of ships wait for days on the horizon of the Gulf of Guinea to get into the port and discharge their goods.

On the way in and out they pass the skeletons of scuttled and abandoned ships, some of which have capsized because of the effects on the tides of the wrecks.

Yet there are also suspicions that amidst lax marine regulation, companies treat Lagos' waters as a ship refuse site, avoiding incurring the expense of disposing of old vessels.

Experts say the wrecks act as groynes, halting the flow of sand downshore and accelerating erosion.

Lack of regulation on the waters has also helped illicit activity thrive, turning the ghost ships into hideouts for sea criminals. 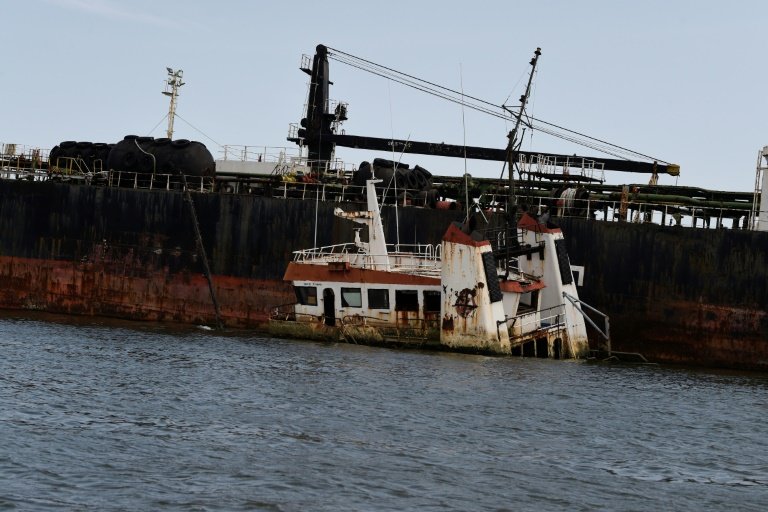 The wrecks are a perfect hiding place for traffickers / © AFP

Small groups of former crew lounge on several of the wrecks, lodging in dim, disused cabins, keeping watch for anyone seeking to strip the ships of valuable scrap.

One crew member, who asked not to be identified, said he and three others had worked shifts to stay in the cabin all day and night for 15 months since the ship capsized.

"People will come and steal valuables that are still here," he added.

The Nigerian Maritime Administration and Safety Agency, which polices the country's waterways, says it is proactive in removing the likely hundreds of wrecks but concede that removing them is expensive.

Taibat Lawanson, a professor of urban planning at the University of Lagos (UNILAG), said the price of removal was prohibitive.

"Because removing them is so costly, neither the state government nor the federal government takes enough responsibility for their removal," he said.

Small groups of naval officials, some with uniformed t-shirts, others topless in the sun, bask on the upper decks of confiscated ships.

Tunji Adejumo, a landscape architect and ecologist at UNILAG, says the navy has become the main monitoring agency on the coastline.

"Yet even still, many of these shipping companies are able to avoid culpability for leaving their wrecks in the water," he said.

"These shipwrecks hurt the aesthetics of the coastline. They degrade over time, dumped there but rarely dealt with. And they have serious environmental effects."

In Lighthouse Beach, a mostly quiet get-away lined by large beach houses, a wreck at the very end of the shore has been a landmark for visitors for years. 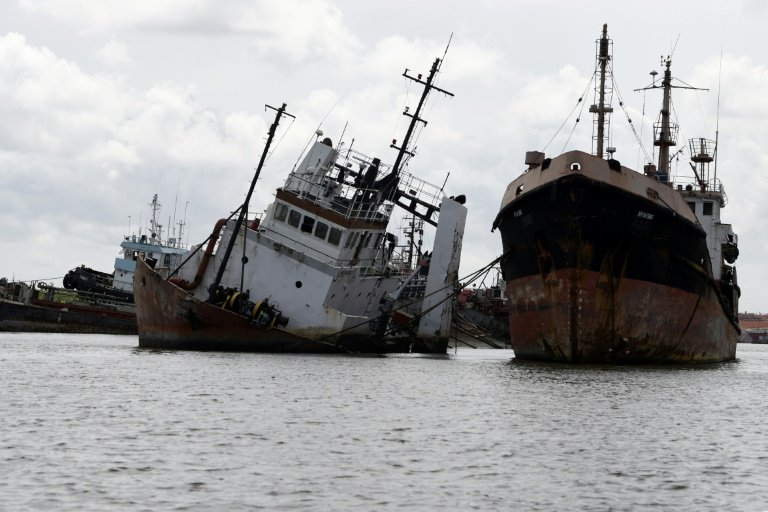 Some of the wrecks have become havens for marine wildlife -- others are dangerous, both above and below the waves / © AFP

In parts of the waterways, scuba-diving and spearfishing capitalise on the wrecks aesthetics and the aquatic life it attracts.

Yet many of the wrecks, below sea level and invisible above it, present numerous dangers.

A 6:00 pm curfew exists for commercial boats, which is imposed in part to prevent accidents.

White flags are hoisted on few of the below-the-water wrecks to warn approaching craft but most have no visible warning signs, meaning riders have to remember where they are.

"It can be dangerous riding the boats at night," said Oladele.

"But the curfew also protects all these crazy activities that you would see if you travelled here after dark."