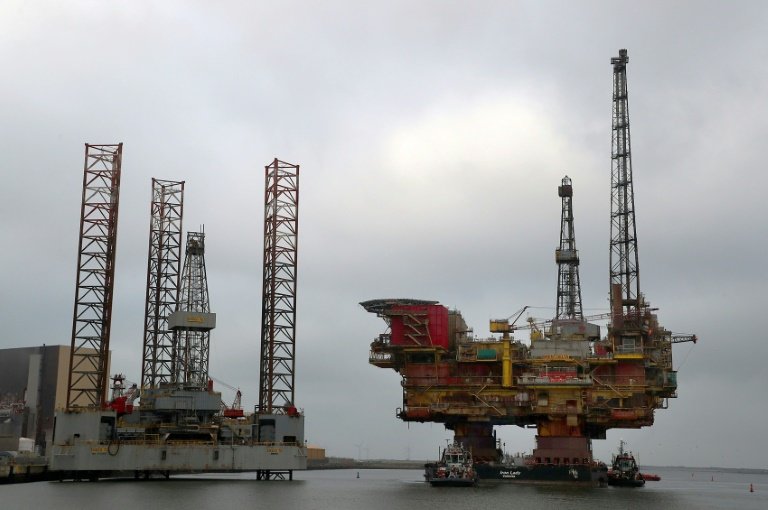 The five largest publicly listed oil and gas majors have spent $1 billion since the 2015 Paris climate deal on public relations or lobbying that is "overwhelmingly in conflict" with the landmark accord's goals, a watchdog said Friday.

Despite outwardly committing to support the Paris agreement and its aim to limit global temperature rises, ExxonMobil, Shell, Chevron, BP and Total spend a total of $200 million a year on efforts "to operate and expand fossil fuel operations," according to InfluenceMap, a pro-transparency monitor.

Two of the companies -- Shell and Chevron -- said they rejected the watchdog's findings.

"The fossil fuel sector has ramped up a quite strategic programme of influencing the climate agenda," InfluenceMap Executive Director Dylan Tanner told AFP.

"It's a continuum of activity from their lobby trade groups attacking the details of regulations, controlling them all the way up, to controlling the way the media thinks about the oil majors and climate."

The report comes as oil and gas giants are under increasing pressure from shareholders to come clean over how greener lawmaking will impact their business models.

As planet-warming greenhouse gas emissions hit their highest levels in human history in 2018, the five companies wracked up total profits of $55 billion.

At the same time, the International Panel on Climate Change -- composed of the world's leading climate scientists -- issued a call for a radical drawdown in fossil fuel use in order to hit the 1.5C (2.7 Fahrenheit) cap laid out in the Paris accord.

InfluenceMap looked at accounts, lobbying registers and communications releases since 2015, and alleged a large gap between the climate commitments companies make and the action they take.

It said all five engaged in lobbying and "narrative capture" through direct contact with lawmakers and officials, spending millions on climate branding, and by employing trade associations to represent the sector's interests in policy discussions.

"The research reveals a trend of carefully devised campaigns of positive messaging combined with negative policy lobbying on climate change," it said.

It added that of the more than $110 billion the five had earmarked for capital investment in 2019, just $3.6bn was given over to low-carbon schemes.

The report came one day after the European Parliament was urged to strip ExxonMobil lobbyists of their access, after the US giant failed to attend a hearing where expert witnesses said the oil giant has knowingly misled the public over climate change.

"How can we accept that companies spending hundreds of millions on lobbying against the EU's goal of reaching the Paris agreement are still granted privileged access to decision makers?" said Pascoe Sabido, Corporate Europe Observatory’s climate policy researcher, who was not involved in the InfluenceMap report.

In 2017 the company's shareholders voted to push it to disclose what tougher emissions policies in the wake of Paris would mean for its portfolio. 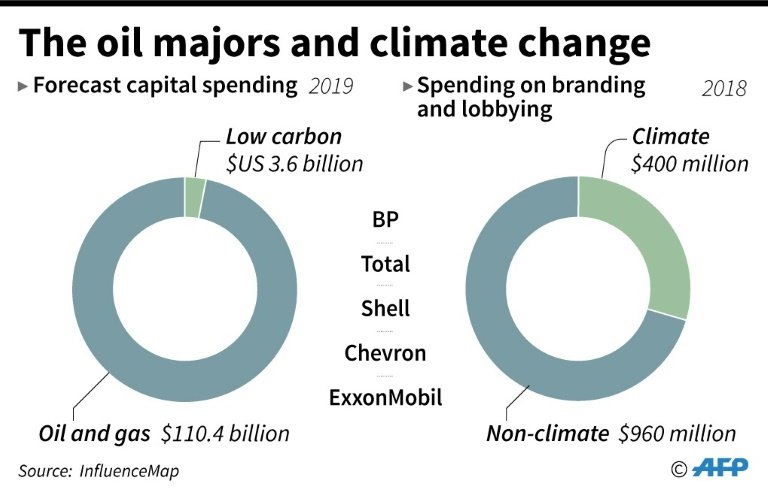 With the exception of France's Total, each oil major had largely focused climate lobbying expenditure in the US, the report said.

Chevron alone has spent more than $28 million in US political donations since 1990, according to the report.

AFP contacted all five oil and gas companies mentioned in the report for comment.

"We disagree with the assertion that Chevron has engaged in 'climate-related branding and lobbying' that is 'overwhelmingly in conflict' with the Paris Agreement," said a Chevron spokesman.

"We are taking action to address potential climate change risks to our business and investing in technology and low carbon business opportunities that could reduce greenhouse gas emissions."

A spokeswoman for Shell -- which the report said spends $49 million annually on climate lobbying -- said it "firmly rejected" the findings.

"We are very clear about our support for the Paris Agreement, and the steps that we are taking to help meet society's needs for more and cleaner energy," they told AFP.

BP, ExxonMobil and Total did not provide comment to AFP.