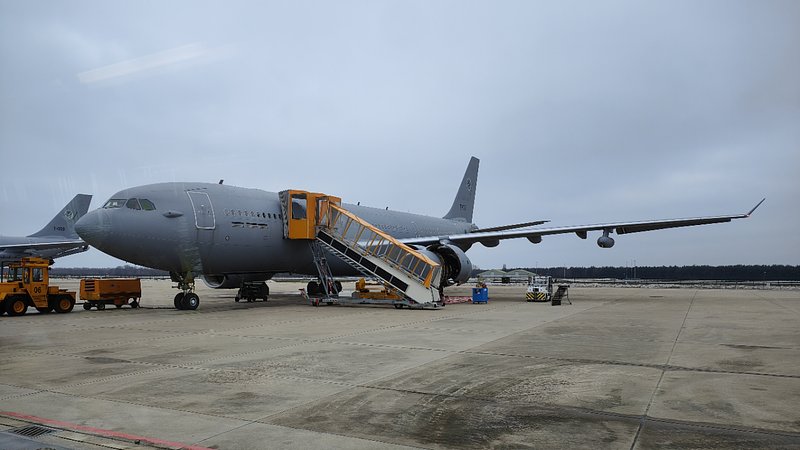 A Luxembourgish crew is actively training on NATO's air-to-air tankers, which have been positioned near the alliance's eastern flank amid Russia's war in Ukraine.

The seven Airbus A330s of the Multinational Multirole Tanker Transport Unit (MRTT) have been refueling fighter aircraft and AWACS reconnaissance aircraft of NATO member states, and spent a joint 1,000 hours in the air.

On Tuesday, a Luxembourgish crew was onboard a training flight from Eindhoven in the Netherlands to Findel, in which German Eurofighters were refuelled mid-air.

However the MRTT is not only used for refuelling; It is frequently used as a passenger and cargo plane as well. One of the seven aircraft, stationed at Cologne-Bonn Airport, even acts as a flying hospital.

Luxembourg and the Netherlands jointly initiated the programme in 2016, which soon saw Germany, Norway, Belgium and the Czech Republic join.

The programme is financed by the six member states. The Grand Duchy contributes with 200 paid flight hours, which it hopes to increase to 1,200 hours by 2025.

The MRTT fleet consists of seven A330s. Two more machines are to be added in 2024. Five A330s are to be stationed at Eindhoven Airport and four at Cologne-Bonn.

A first major deployment was back in August 2021 as part of the evacuation flights from Kabul in Afghanistan. The aircraft can, thanks to the latest technology, defend themselves against missile attacks.

The logistics of the programme are also managed from Luxembourg: In Capellen, by the NATO Support and Procurement Agency.