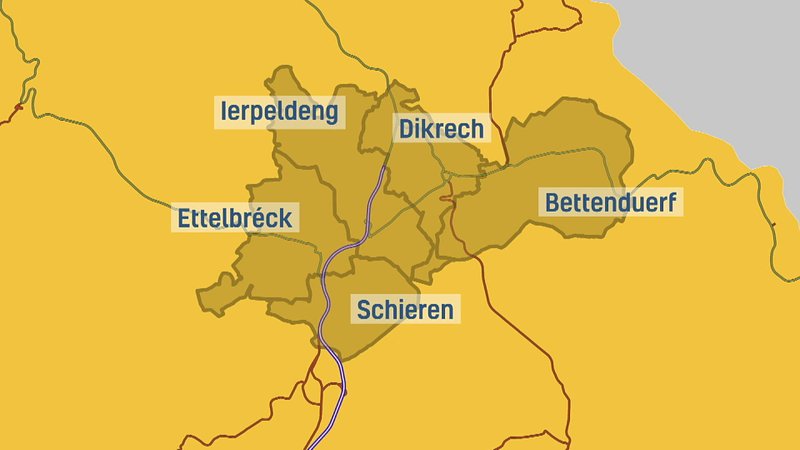 At present, little is known about the progress of the planned fusion of five northern municipalities.

In 2018, the municipal councils from Bettendorf, Diekirch, Ettelbruck, Erpeldange-sur-Sûre, and Schieren agreed on banding together, a plan that should have been confirmed by the population in a referendum at the beginning of 2022.

However, this did not happen as the pandemic prevented planned town-hall meetings from being organised, say some officials. Others have noted that open and secret opinion differences, mostly focused on money, are the reason for the delay.

Half a year ago, Minister for Home Affairs Taina Bofferding proposed a subsidy worth €60 million, twice as much as initially planned, yet only half as much as the municipalities want. Their proposal was to add €5,000 per resident, which would have bumped up the price to close to €120 million.

Another goal of the municipal fusion was to build a new centre for the Grand Ducal Fire and Rescue Corps (CGDIS) at the Fridhaff roundabout. The municipality of Diekirch and the government already purchased land across from a petrol station, but the Ministry for the Environment, Climate and Sustainable Development labelled the location unsuitable. An alternative site has since been chosen.

Nevertheless, it is not known how much the project has progressed over the course of the year. The Master Plan for Spatial Planning 2023 (PDAT) is however expected to change that.

The last PDAT still dates to the year 2003. The new plan now classifies the municipalities of Diekirch, Ettelbruck, and Erpeldange-sur-Sûre as a 'Development and Attraction Centre' of national importance. Bettendorf and Schieren will only be awarded the same status if the fusion goes through.

What seems to be clear is that a lot of momentum has been lost. The different Aldermen Councils no longer meet on regular basis and few details are communicated. Bettendorf Mayor Pascale Hansen has further stepped down from her role as spokesperson due to personal reasons. No successor has yet been named.