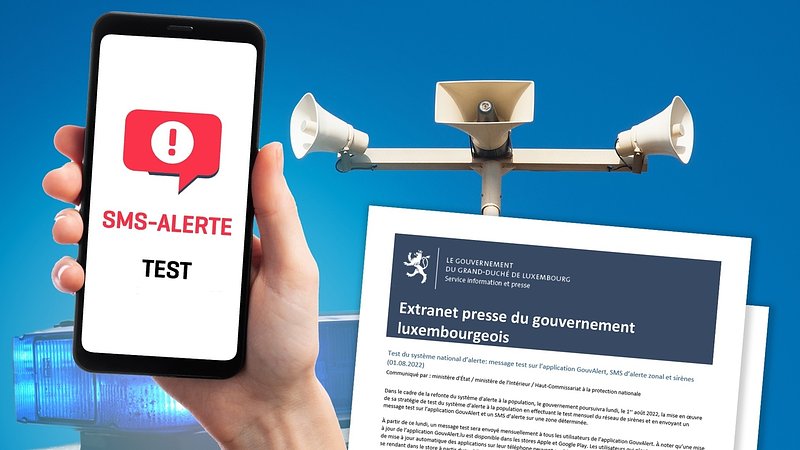 Up until now, the government always announced beforehand where and when it sends its test alert messages to people. On Sunday, however, an unannounced version was sent to simulate a real emergency situation.

The national warning system designed to alert the population in case of a disaster event is currently being overhauled. Following a series of announced test alert messages distributed since May, the government has now sent its first set of unannounced alerts to citizens in certain regions of the country.

The undisclosed emergency simulation was made to prepare operators for a real catastrophe. Alain Becker, first councillor at the Ministry for Home Affairs, provided insight into the importance of this process:

"The objective of [Sunday] morning's procedure was to test the operators, including Post, Tango, and Orange, who are responsible for sending out messages. After all, we and the government are not able to directly reach the population. It is part of the strategy to see how they operate when they are unaware of a test. ... And one can preliminarily say that this morning's tests were successful. Final analyses still have to be completed, but we achieved what we wanted."

The alert was sent to people in the municipalities of Bettembourg, Dudelange, Frisange, Kayl, Roeser, Rumelange, and Weiler-la-Tour. Recipients can rest assured that nothing bad happened and that it was part of the national test strategy.

Becker conveyed that further unannounced tests will be conducted, some expected to take place late at night or in the early morning hours. Aside from regular testing of alert text messages and the usual ringing of sirens on the first Monday of each month, the Ministry has further ensured that the 'GouvAlert.lu' app has been tested over the course of the last months.

Becker elaborated that once all test results have been analysed, a report will be presented to the government. A respective press conference is scheduled for early December.