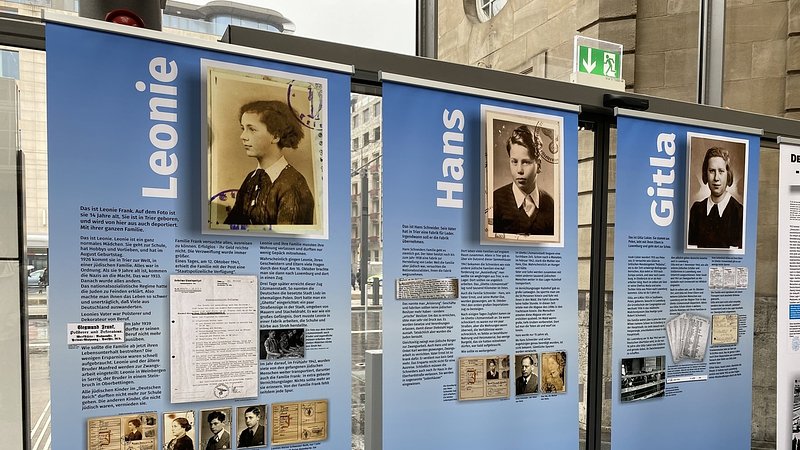 Over 500 Jews from Luxembourg and Trier were taken to the Litzmannstadt ghetto in Poland on a deportation train on 16 October 1941.

Eighty-one years ago, the deportation train departed from the Luxembourg central station. Its destination: Litzmannstadt, a ghetto aimed at isolating, degrading and subjecting Jewish deportees to violence.

Read also: The deportation of Luxembourg's Jewish community during WWII

On Friday, a memorial ceremony was held at the central station. At the ceremony, an exhibition was launched to remind young people of the history of the Holocaust and tell the story of the Luxembourgish inhabitants who had to leave their lives behind.

It is important to bring this topic closer to young people so that it is not forgotten, says Marc Schoentgen, president of the Auschwitz Committee in Luxembourg.

Pupils of the Fieldgen school attended the ceremony, after having visited the Auschwitz-Birkenau concentration camp. For them, the visit and the ceremony were important so that the topic is not forgotten, says one pupil.

The pupil told RTL it is good that young people can also participate, because they are the future of our society. The Holocaust was something tragic, that has to be explained again and again and not forgotten, she explained.

During the ceremony, the students also listed the names of the victims from Luxembourg - an emotional moment.

It was important to remember the history of the Luxembourg Jews who were expelled from the country and whose rights and humanity were taken away, the pupil continued.

This should not happen again. The reading aloud also had a very special power in it, she added, when you hear these very names spoken you can imagine how scared people were back then when they had to get on that train and didn't know where they were going.

After the ghetto, deportees were taken to the Kulmhof and Auschwitz-Birkenau extermination camps. Of the 513 Jews, 13 survived.