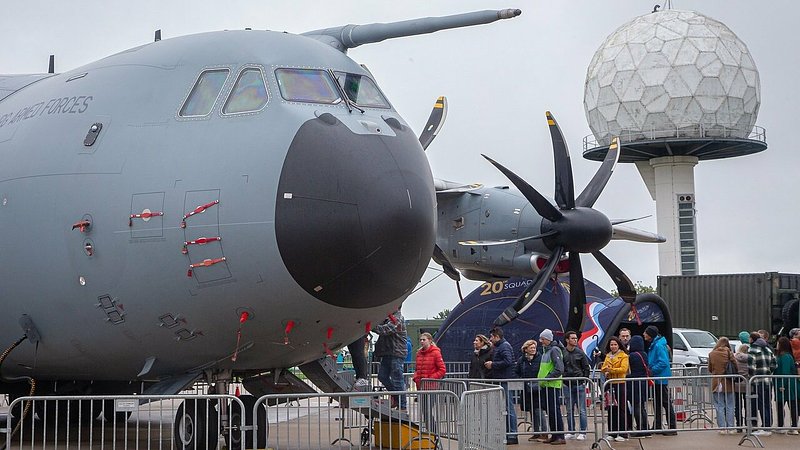 Over the weekend, the Ministry of Defence is organising an open display of its military air fleet at Findel airport, where people can get a closer look at the A400M, among other things.

People gathered in numbers at Findel airport on Saturday to inspect Luxembourg's air transport and surveillance capabilities. According to Defence officials, about 4,000 spectators made use of the Open Air Days to get a closer look at the military vehicles.

The A400M, the first military airplane of the Luxembourg Army since 1968, belongs to the Belgian-Luxembourg bi-national fleet. It carries more than 20 metric tonnes of technical equipment on board and can load an additional nine pallets of material, or three helicopters, if necessary.

The A330, a NATO Airbus belonging to the so-called Multi Role Tanker Transport (MRTT) programme, can be used as a person or cargo carrier. In the span of just 24 hours, the plane can also be repurposed into a hospital.

Luxembourg Defence Open Air Days (1.10.22)
© Steve Müller
The photos published on this site are subject to copyright and may not be copied, modified, or sold without the prior permission of the owner of the site in question.

A number of contracted planes are also part of the fleet, including the BE350 ISR, which is used to monitor the weapons embargo against Libya.

Lieutenant Colonel Georges Campill provided further explanations: "The plane is stationed on Sicily and flies along the Libyan coast, using its equipment to scan for different ships. If a suspicious ship is located, the plane approaches so that it can identify it with its cameras and communicate the information to the waterborne operations."

Historically speaking, Luxembourg's Army is land-based. However, to fulfil the growing international defence efforts, it has been diversifying its operations in recent years.

Chief of Staff Thull elaborated: "Air fleets are more expensive than ground troops. But, money has to be spent in a way that makes sense. That is why, in recent years, we have always worked with other countries to build multilateral cooperations so that a maximum number of countries can benefit from the material."

By 2028, Luxembourg envisions to invest 1% of its GDP into defence to fulfil its obligations to NATO.