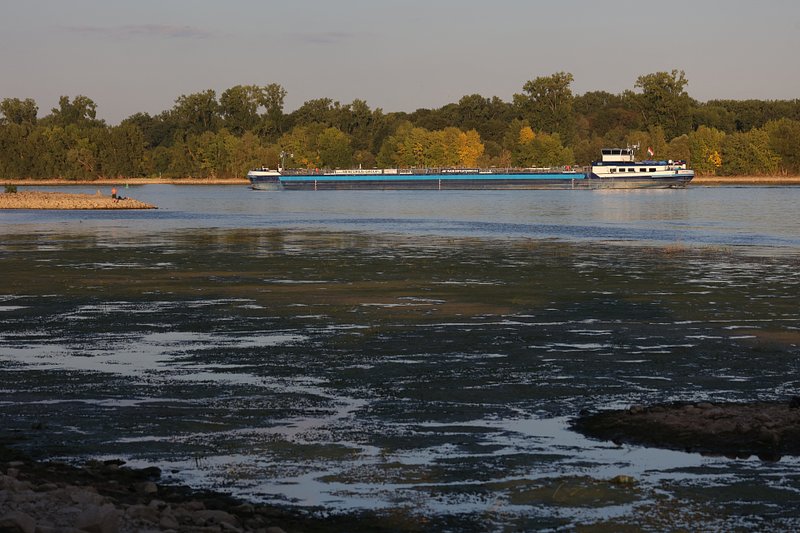 The Rhine's water levels are so low that its shipping industry risks a complete halt. Its only hope is decent rainfall.

High temperatures and far too little rain are causing more and more problems throughout Europe: one of its largest rivers, the Rhine, is running low on water. The consequences are already impacting Luxembourg: on Friday, not a single ship arrived at the port of Mertert.

Read also: Recommendations during a drought

However, the problem is not at the Moselle, because the level in Grevenmacher is still at 2.10 meters. But the high levels of algae in the harbour indicate that the river is barely flowing.

Shipping traffic is also slowing down: at the moment, ships are loading only a third of their normal loads. Many do not even get to Mertert, or do not get away, because the cost of goods has become much too expensive, says Jürgen Helten, general director of Luxport.

However, the real issue comes from the Rhine. On the Middle Rhine, the water level is only at 40 centimeters, and could fall another 10 or 15 centimeters by Tuesday. The situation is reminiscent of the low water of 2018.

Michel Girard, who as a captain is regularly on the Rhine, points out that the low water levels have arrived one to two months earlier compared to 2018. If there is no rain soon, there could be no ships sailing on the Rhine even at Christmas to deliver wheat, coal, chemical products or petrol. This would have dramatic consequences for the economy, for which the Rhine is an artery.

In this context, the president of the Bavarian service station operators, Günter Friedl, shared three considerations. Firstly, with the low water and the inland waters, the ships can no longer transport as much. Secondly, there is a shortage of freight lorries at the moment, so it is not possible to use the roads. And finally, there is a lack of staff on the rail network to transport the goods.

Peter Claereboets, captain of the Servia, is currently fighting his way up the Rhine. The radar shows that the waterway is getting narrower by the minute. The sandbanks are getting closer to his ship, which is loaded with coal at 30 to 40 percent of its capacity.

Not only the low water levels, but also the prices are causing problems in the sector. Claerebots' coal now costs 60 euros per ton instead of the normal 8 euros. Given the current prices, Mertert might go a while without seeing any ships in its port, underlines Helten.

After the crisis year of 2018, there was much discussion about whether more barrages would have to be built in the Rhine, he explains. Concerns about the environment, but also the high costs and the time required, put the brakes on the project. Conclusion: today only one hope remains, and that is proper rain.

This statement gives one something to think about. Over 30 percent of diesel and gasoline for Luxembourg is stored in Mertert. 80 percent of it comes from the Rhine and the Moselle to Luxembourg by ship.