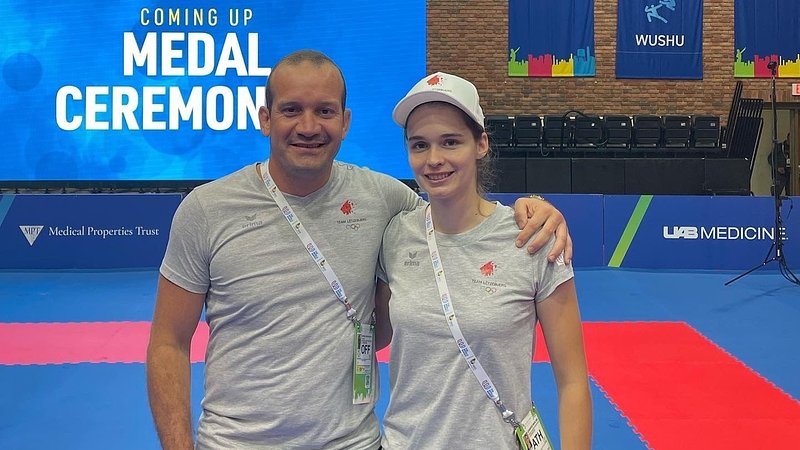 Jenny Warling with national coach Raphael Veras at the World Games in Birmingham in the US State of Alabama. / © Karate - Luxembourg National Team / Facebook

On Saturday, Luxembourgish karateka Jenny Warling competed at the World Games in Birmingham (USA) and lost her final bout against local fighter Trinity Allen, thus narrowly missing out on bronze.

Only eight fighters qualify for the World Games in each category. Warling entered the competition as fifth in the ranking of the -55 kg category. The 28-year-old faced a difficult draw in the group stage of the competition.

In her first bout, the Luxembourgish fighter immediately competed against Olympian gold medalist Ivet Goranova from Bulgaria. Warling got the better of her opponent and won the match 5:1.

The second fight ended with a much narrower result. Warling faced Valeria Kumizaki from Brazil, whom she beat 1:0.

The final fight of the group stage saw Warling go up against no other than Ukraine's Anzhelika Terliuga, the number-one ranked fighter in the world. Warling lost the bout 1:4 and thus entered the knock-out stage as second in her group.

Warling progressed to the semi final where she faced the other group winner, world champion Ahlam Youssef from Egypt. After the bout ended in a 0:0 draw, the referees gave a technical evaluation and awarded the win to Youssef.

After the semi-final loss, Warling had one last chance of still getting a bronze medal. In her final fight of the World Games, she competed against local karateka Trinity Allen, a match that she lost 0:6, thus narrowly missing out on silverware in Birmingham.

Terligua won the final 1:0 against Youssef.