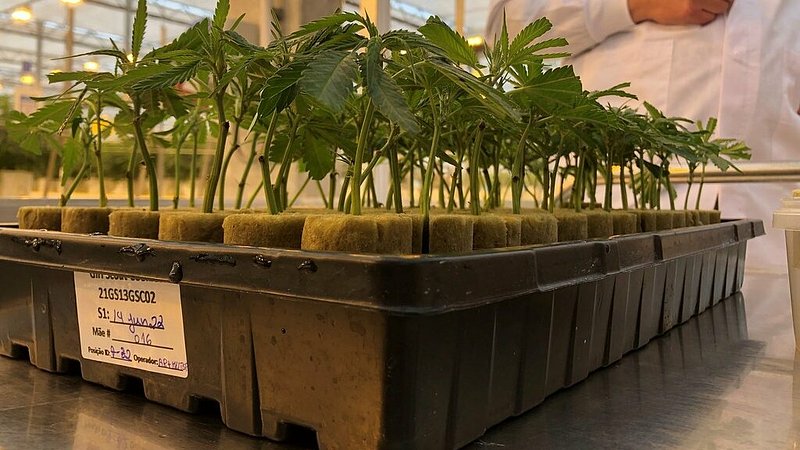 Minister Lenert intends to fast-track the move towards legal cultivation of medical cannabis in Luxembourg. On the final day of her Portugal visit, the LSAP politician thus received insights into local production methods and legislative frames.

Portugal has around 20 cultivation sites for medical cannabis. One of them is located in Cantanhede, a town of close to 40,000 residents about 90 kilometres south of Porto. Here, Canadian company Tilray set up specialised tents in 2019, which they have used since to grow cannabis for medical purposes.

Spokesperson Donna Hoossin provided insight: "We have full control over irrigation and fertilisation. We control the climate inside [the tent], we have equipment to either heat up or cool down. We monitor temperature, air humidity, as well as CO2 levels so that our plants benefit from optimal conditions."

Tilray invested €50 million into the site. Aside from growing the medical cannabis, there are also departments where the plants are processed into pharmaceutical products. Up to 20 tonnes of cannabis can be cultivated on a yearly basis.

Since December 2021, Luxembourg has received deliveries of medical cannabis from this site.

© Fanny Kinsch
The photos published on this site are subject to copyright and may not be copied, modified, or sold without the prior permission of the owner of the site in question.

Minister Lenert made use of her visit to also learn more about the legislative aspects of legalising the cultivation of medical cannabis. A respective draft bill is scheduled to be filed in Luxembourg before the end of the year so that in 2023, the government can begin launching a similar bill for legal access to recreational cannabis.

Minister Lenert explained that it is ultimately the plan to also legalise the cultivation of recreational cannabis in the Grand Duchy: "In terms of medical cannabis, the government will create a legislative frame by which producers have to abide. When it comes to recreational cannabis, we are currently considering to work with licenses, but we are still communicating with countries that have already implemented this strategy."

The politician concluded that the government wants to ensure certain quality standards and monitor the market in the interest of public health. Aside from Luxembourg, the Netherlands, Germany, and Malta have similar projects underway.

Although every EU country is free to set its own legislative frame, communication between states is still crucially important, noted Alexis Goosdeel, director of the European Monitoring Centre for Drugs and Drug Addiction (EMCDDA) in Lisbon. He elaborated that terrestrial borders will inadvertently be affected by the drug policies of neighbouring states.

Additionally, a series of United Nations treaties, which Luxembourg also signed, only allow for experimental and temporally limited legalisation projects.

Nevertheless, Minister Lenert expressed confidence that the legal cultivation of medical cannabis in Luxembourg can begin in the near future: "We are one of the first countries to have launched a project that gives people access to medical cannabis and we are one of only three countries to also reimburse costs. It thus makes sense to think ahead even further and be among the first to also legalise cultivation."