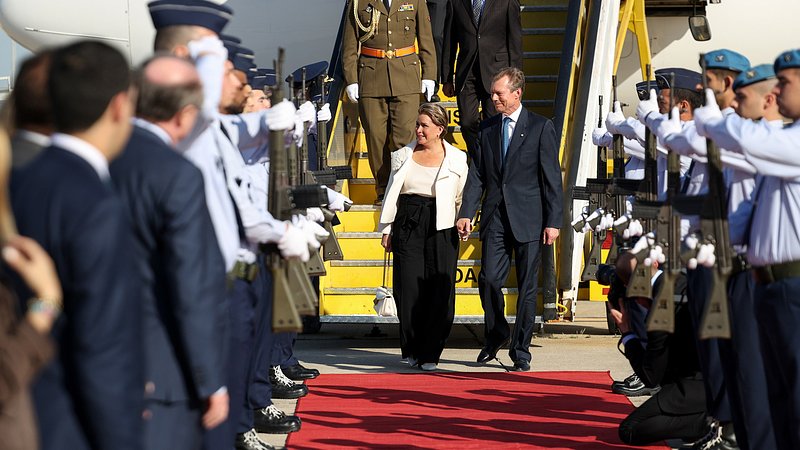 The Grand Duke and Grand Duchess were seen off in pomp on Tuesday, before getting on the plane to Lisbon.

At the invitation of the president of the Portuguese Republic, the grand ducal couple will be on state visit in Lisbon and Cascais over the next two days. They were seen off at the airport on Tuesday afternoon, in the presence of ministers Jean Asselborn, Corinne Cahen, Franz Fayot and Yuriko Backes, as well as an official economic delegation and representatives from the cultural sector.

This is the couple's second state visit to Portugal after 2010. Two state visits are unusual according to protocol, but underline the excellent relationship between the two countries. The current visit was originally planned for 2020, but had to be rescheduled due to the pandemic.

Grand-Ducal State Visit to Portugal (10.5.22)
© SIP / Jean-Christophe Verhaegen SIP / Emmanuel Claude Maison du Grand-Duc / Sophie Margue
The photos published on this site are subject to copyright and may not be copied, modified, or sold without the prior permission of the owner of the site in question.

The grand-ducal couple and their delegation will spend the first day in Lisbon, where they will be officially welcomed by the Portuguese president, followed  by a visit of the Saint Mary church and a tour by tram of the historic quarter. At the same time, minister for the economy Franz Fayot will take part in a start-up event.

On Thursday, the delegation will meet with the prime minister and deputies of the Portuguese parliament at São Bento Mansion. After lunch, they will continue to Cascais, where they will visit the exhibition "Portugal et Luxembourg - pays d'espoir en temps de détresse", among other things.

Strong ties between the two countries

Cascais is also the place where Grand Duchess Charlotte, Prince Felix, their six children and members of the government found refuge for a few weeks in 1940 after fleeing the German invasion in Luxembourg.

Diplomatic relations between Luxembourg and Portugal have existed for over 130 years. The first Portuguese ambassador to Luxembourg arrived in 1891, while Luxembourg has had an embassy in Lisbon for 34 years.

The importance of Luxembourg for Portuguese migration cannot be understated, of course. Around 94,000 people with Portuguese nationality currently live in the country, accounting for the majority of foreign resdidents, with over 15%. Around 300 Luxembourgers have settled in Portugal, according to figures from 2019.