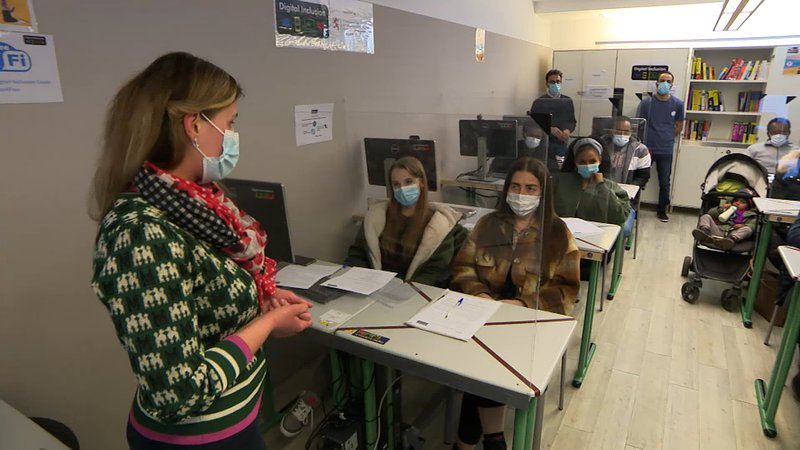 Founded in 2016, Digital Inclusion has made it its mission to provide computers to people in need.

Unsurprisingly, demand for equipment increased since the Russian invasion forced thousands of Ukrainians to relocate to the Grand Duchy.

In light of the current situation, the non-profit has started to distribute up to one hundred computers on a weekly basis.

Patrick de la Hammette, both founder and president of Digital Inclusion, commented: "We received 300 requests last week, most of which came from people who fled Ukraine. By now, this is actually the case for every single application."

16 people currently work at the non-profit organisation to help individuals who are excluded from the digital world. Some of them were once refugees themselves, explained de la Hammette: "Half of our 16 employees are former refugees. Many of them came from Syria a couple years ago and they now support those fleeing from Ukraine."

Natalia Miroshnyehenko, who came to Luxembourg with her two children, was one of 20 refugees to receive a computer on Monday. She noted: "I hope that my children will soon be able to go to school here in Luxembourg. My oldest is thirteen and just had her first appointment at the Ministry. My younger one still needed to get vaccinated and have a medical check-up, but I hope that they can now go to school."

Anna Rybalchenko fled a town near Kyiv with her mother and has since found shelter in the home of a Luxembourgish host family. She was happy to receive a laptop from Digital Inclusion: "I heard about the initiative through a Facebook group and it is amazing that I can now continue to study."

Since the non-profit has focused on providing computers to refugees, many of their keyboards already include Arab translations. Now, they also added the Cyrillic script to cater to Ukrainians, conveyed de la Hamette.

Equipment is distributed with the help of a waiting list. Refugees and people registered with the social offices are eligible for the support since computers are needed to complete many essential administrative tasks.

De la Hammette stressed that smartphones cannot fully replace computers: "Smartphones are very useful, but a computer allows you to work more professionally, people with loads of time on their hands in particular. Many of the people who come from Ukraine want to get straight into work, which is why a computer is so important.

As of 2022, the Ministry for Family Affairs and Integration has officially started to support Digital Inclusion.