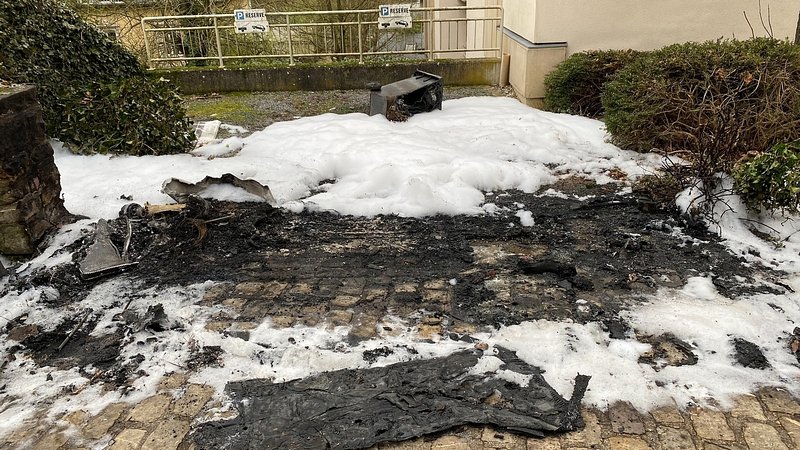 A car fire on Friday evening caused extensive damage in front of a house in Clausen. The police are looking for the driver.

At around 11.40pm on Friday evening, a motorist was involved in an accident in Montée de Clausen, near house number 9, in Luxembourg City.

The car caught fire and burned to the ground, causing extensive material damage to the scene.

The driver involved in the accident fled on foot and has not yet been identified. The vehicle is a grey Audi RS3 registered in Luxembourg, the police said.

Any useful information should be forwarded to the police, either by calling (+352) 244 40 1000, or by writing an e-mail to Police.LUXEMBOURG@police.etat.lu

Besides the accidents already reported by the emergency services, the police shared information about three other incidents.

Two drivers crashed in rue Renert in Sanem at around 1am on early Saturday morning. While both vehicles sustained significant damage, no one was injured. One of the drivers did, however, turn out to be inebriated. But as the alcohol level was below 1.2%, the driving licence was not confiscated.

Shortly after 3am, an accident occurred in rue Audun in Esch-sur-Alzette. No one was injured but the driver's alcohol test came back positive. The driving licence was confiscated.

At around 5am, a motorist on Boulevard Kennedy in Esch-sur-Alzette stood out to police due to their erratic driving style. After pulling the driver over, the police confirmed that they were inebriated, but below the threshold of 1.2%, resulting in a fine.