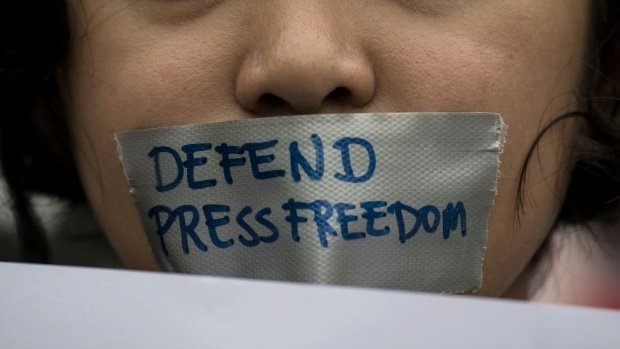 In 2021, violence against press and media representatives was on the rise around the world, and it has recently become a much-discussed topic in Luxembourg.

Journalists are living in dangerous times, MP Guy Arendt from the Democratic Party (DP) told the Chamber of Deputies on Thursday afternoon, as part of a debate on press freedom that his party had requested.

Threats against journalists have reportedly increased during the pandemic, not only abroad, but also in Luxembourg. Journalists have received death threats, complaints are lodged to pressure them, and they are accused of spreading lies and being manipulated from the outside, Arendt stated.

What is happening now is "unacceptable", the MP stressed. On behalf of all parties in the Chamber of Deputies, Arendt tabled a resolution in which the MPs pledge to defend the press and denounce any incitement to violence against it.

In addition, Prime Minister and Minister for Communications and Media Xavier Bettel has proposed to the Press Council a revised version of the 'Bettel Circular', named after the PM. Bettel admitted on Thursday that the circular has "not fully achieved its objective".

During the debate devoted to press freedom, MP Francine Closener from the Luxembourg Socialist Workers' Party (LSAP) and MP Djuna Bernard from the Green Party (Déi Gréng) questioned the minister on the state of progress of the access to information dossier.

The Bettel Circular of 2016 is controversial: it was supposed to promote access to information, but according to the Luxembourg Association of Professional Journalists (ALJP), it has achieved the opposite.

The Circular stipulates that when contacting ministries, journalists have to get in touch with a person in charge of communication, who coordinates the requests, meaning that they can no longer contact officials directly.

After personal data of journalists and politicians was shared on social networks in recent weeks and they were subsequently harassed, Minister of Justice Sam Tanson said that the law could be adapted to punish such acts.

Similar measures are already provided for in the French Civil Code. The Minister announced that she will look into this further in the coming weeks.