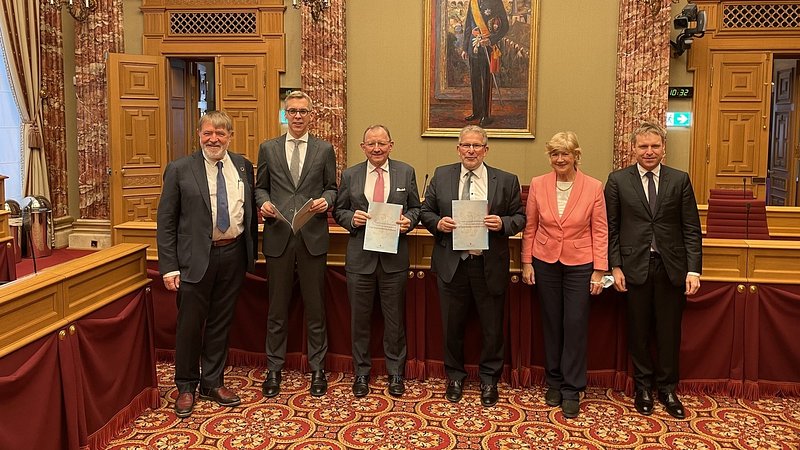 The second chapter of votes to amend Luxembourg's constitution will include topics such as language, the flag and the national anthem.

At a press conference on Friday morning, the four rapporteurs of the constitutional revision said the next chapter on the Grand Duke and the monarchy would strengthen national identity.

Simone Beissel, Léon Gloden, Charles Margue and Mars Di Bartolomeo said the Luxembourg's languages, flag, and national anthem were not yet enshrined within the Constitution, yet the revision could see the national symbols added.

Alongside Luxembourgish, German and French will be named national languages. The rapporteurs said they regarded multilingualism as an asset of the Grand Duchy, which is enshrined in the Constitution. While Luxembourg declares itself a part of Europe, without questioning its national sovereignty, Di Bartolomeo stated that the Grand Duke's role in the State would be strengthened, as he would be explicitly mentioned as head of state. The revision would also confirm Luxembourg as a constitutional monarchy.

Gloden criticised people who claim that in Luxembourg, people live in a dictatorship. "In this country, democratically organised institutions determine the law," he said.

The four rapporteurs said this chapter is an evolution rather than a revolution. They also stated it was important to take into account all the country's citizens, as well as making efforts to explain the changes properly. Fernand Etgen, president of the Chamber of Deputies, said constitutional reform was often mixed up with the management of the coronavirus pandemic, adding that this made no sense as they were completely different topics.

Etgen said an information campaign would take place, dispensing brochures to households with information on the constitutional reform available in three languages. Although there are no plans at present for citizens' meetings, these have not been excluded in the future.

The text of the law on the chapter concerning the Grand Duke and the monarchy will be voted on in Parliament on 25 January. The chapter on justice has already been validated by a considerable majority. The second compulsory vote should also see the light of day again this year. At the same time, bills are being voted on for a National Judicial Council and on the statutes of the magistrates. The advice of the Council of State is still in progress.