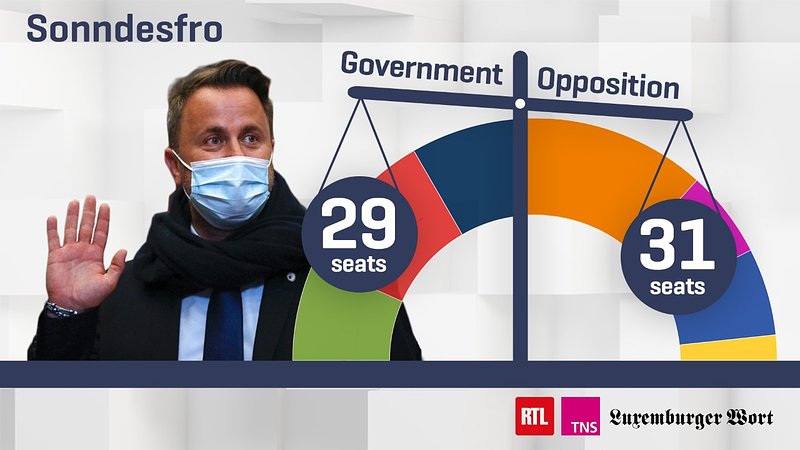 If national elections were to be held on Sunday, Luxembourg would find itself faced with a completely new political landscape.

This is suggested by the latest 'Sonndesfro', a poll carried out by TNS Ilres on behalf of RTL and Luxemburger Wort.

Numerous politicians have lost significant favour and trust among voters. If national elections were to be held on Sunday, a total of ten seats in the Chamber of Deputies would be redistributed compared to the 2018 national elections. The Christian Social People's Party (CSV) and Prime Minister Xavier Bettel's Democratic Party (DP) would take the biggest hits, while the Pirate Party and the Alternative Democratic Reform Party (adr) would come out on top. This is a broad summary of the results of the latest 'Sonndesfro', carried out by TNS Ilres on behalf of RTL and Luxemburger Wort.

For the first time, the Luxembourg Socialist Workers' Party (LSAP) would also be the majority party in the currently governing three-party coalition.

Pirate Party, adr, and LSAP surge in popularity, as CSV and DP dwindle

The results of this poll come as a true bombshell. If national elections were to be held next Sunday, Luxembourg would see itself faced with a completely different political landscape compared to three years ago. Nevertheless, there are distinct political trends that stand out. The Pirate Party would gain +5 seats and the adr +3, as Tommy Klein from TNS Ilres explains.

Klein notes that while the Pirate Party is continuing its upward trend, the adr would gain a substantial number of seats compared to the last elections. Looking at the governing coalition, it is mainly the LSAP that manages to improve its results compared to the 2013 and 2018 elections, plateauing at a higher level. However, Klein also points out that two of the three majority parties would lose a significant number of votes. While the DP would lose three seats, the Green Party (Déi Gréng) would also take a hit compared to its result in 2018, even though not quite as bad as the party of Prime Minister Xavier Bettel.

The LSAP would gain two seats, while the Green Party would lose one. The Left Party (Déi Lénk) remains more or less at the same level.

The biggest loser of the poll, Klein stresses, is without a doubt the CSV, which would lose a total of six seats. The party would thus have even less seats than in 1974 and continues its downward trend of the past six months, Klein explains.

Besides the Pirate Party, which would have a total of seven seats, the adr would benefit most from the current situation and also send seven MPs to the Chamber of Deputies.

Klein points out that this would be the adr's best result since 1999. With two opposition parties at seven seats, Klein thinks it would be very likely that they might play a decisive role in determining the next governing coalition in 2023.

Government would lose its majority

These major changes in seats would pose a serious challenge to Luxembourg's political landscape. With two seats less, the government would no longer have a majority in the Chamber of Deputies.

According to Klein, one of the few possibilities left would be three-way coalitions with the CSV. However, due to the party's persistent downward trend, Klein thinks that this is rather unlikely. Another option would be four-party coalitions, which Klein argues could even become the new norm in Luxembourgish politics.

There are two possible explanations for these fluctuations.

The first, Klein explains, is based on the simple observation that Luxembourg's political landscape is clearly fragmented. Voters take a more pragmatic and less ideological approach. For the parties, this means that they have to deal with much more volatile voters, who might vote one way today and another tomorrow, according to Klein.

The second explanation, Klein continues, has to do with Luxembourg's election system. The 2018 elections already showed that a couple of votes can be enough to determine whether a party gains, loses, or maintains a seat.

How do voters rate the government's work so far?

As a general observation, it is apparent that voters show uncertainty. The number of voters who are still undecided one week prior to the elections has increased from 13 to 18%. Voting for individual candidates instead of parties (called 'panaschéieren' in Luxembourgish) is also becoming less common.

Klein notes that the political landscape in general has taken a hit and lost credibility. The recent 'Politmonitor' poll revealed that people disagree with certain measures and increasingly turn their backs on political parties involved in controversies and affairs.

While this poll is of course merely a snapshot tied to the current situation and certainly not a projection for the 2023 national elections, Klein thinks that it is worth asking what is behind these results. It appears that the Grand Duchy's political landscape is becoming increasingly fragmented, with people feeling less and less inclined to follow specific parties and instead take decisions based on current affairs or individual topics, Klein concludes.

Details regarding the method and the poll itself

In the context of the 'Sonndesfro', which is to be seen as a trend indicator and not as an election forecast, a total of 1,879 people who are eligible to vote were called between 11 and 19 November.

All details can be found on Alia.lu