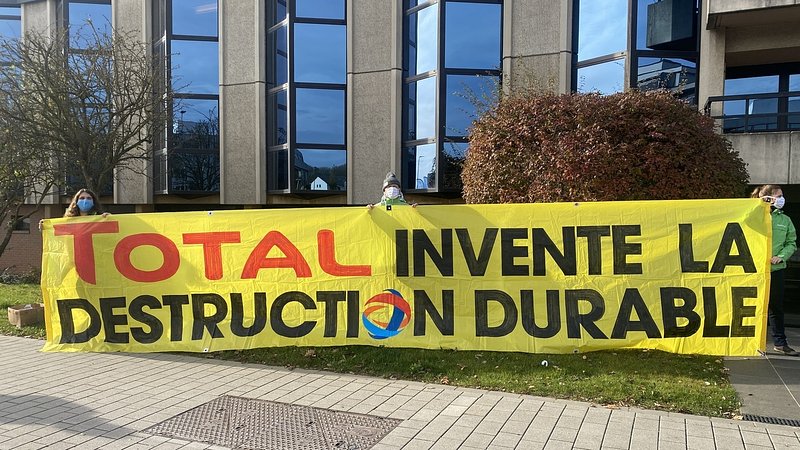 On Wednesday morning, a group of Greenpeace activists protested outside the energy company's Luxembourgish headquarters, levelling accusations of greenwashing.

This means that, according to Greenpeace, Total tries to make itself appear more green and environmentally friendly than the company actually is. As a matter of fact, a recent study found out that the French group knowingly trivialised the effects of climate change in the past.

Greenpeace argues that the fact that Total recently changed its name to TotalEnergies alone is already proof that the company is engaging in greenwashing. Total is still largely focused on oil and gas, Greenpeace points out, stating that while the name may have changed, the business behind it has not.

Speaking to our colleagues from RTL.lu, Greenpeace member Frank Thinnes described this as "completely inappropriate", adding that it is not the only example of the company's greenwashing. Among other things, Thinnes pointed out that TotalEnergies is actively promoting "false solutions" to the climate crisis, such as "blue hydrogen or emissions trading".

Doing this allows TotalEnergies to come across as a better company than they actually are, Thinnes argued.

According to Greenpeace, TotalEnergies spends nearly 30% of its marketing budget on its climate-friendly image. Alongside 20 other organisations, Greenpeace has launched a petition demanding an advertising ban for companies whose activities severely damage the environment. The organisations point out that such an advertising ban already exists for the tobacco industry.

TotalEnergies' Luxembourgish subsidiary has yet to react to the Greenpeace protest. Journalists present at the protest who attempted to get a statement by company representatives were refused entry into the building.