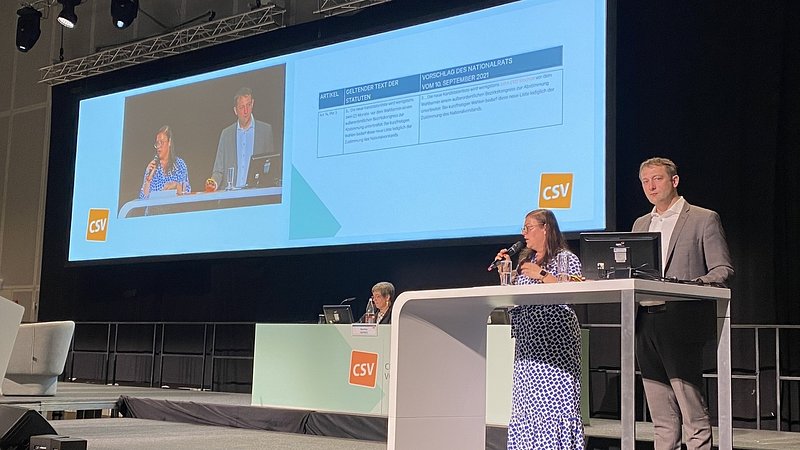 The CSV sees climate policy as a key topic, with Wiseler describing it as "the biggest challenge, not just for Luxembourg". A boost is also needed in the area of digitalisation, according to the party leadership.

Regarding education, the CSV acknowledges that it has been "a bit quiet" recently, something which, according to the party representatives, is going to change. Martine Hansen presented numerous criticisms, stating for instance that Minister of Education Claude Meisch's focus on founding new European Schools would lead to "a parallel education system".

In addition, Meisch also has the wrong approach when it comes to 'Quereinsteiger' (people with degrees from related fields of study entering the teaching profession) or the youth worker diploma, according to Hansen.

As for the minister's recent announcement to make education compulsory until the age of 18, the CSV remains critical and awaits further details. Other topics discussed during the extraordinary general assembly included the reform of the constitution and internal security.

Talking about the party itself, Wiseler stated that the new leadership managed to calm the party down and get it back on track. However, the CSV is still not where it wants to be, with Wiseler pointing out that the controversy surrounding former Party President Frank Engel is not over yet.

Read also: Frank Engel not the only one to appear in court for wrongdoings

All amendments passed by general assembly

Going forward, party members will be able to elect two party presidents and two general secretaries. All four mandates will have to be equally divided between two women and two men. In addition, party members can from now on nominate up to two lead candidates during elections.

Until the next general assembly, which is scheduled for late 2021, a transitional arrangement will apply. Until then, members are free to apply for available mandates – even though the party already presented a number of teams in April.

Overall, the CSV representatives stressed that they want to work as a team while at the same time allowing themselves a certain flexibility.

Party President Claude Wiseler stated that people often try to assign the party a certain label. However, "no box is big enough to fit all party members", Wiseler argued. According to the party president, the CSV is "neither left, nor right", but instead right in the centre of society.

The party wants to build a future for the entire population, without "ideology and blinders", but instead with "heart, soul, dedication, and perseverance", Wiseler concluded.