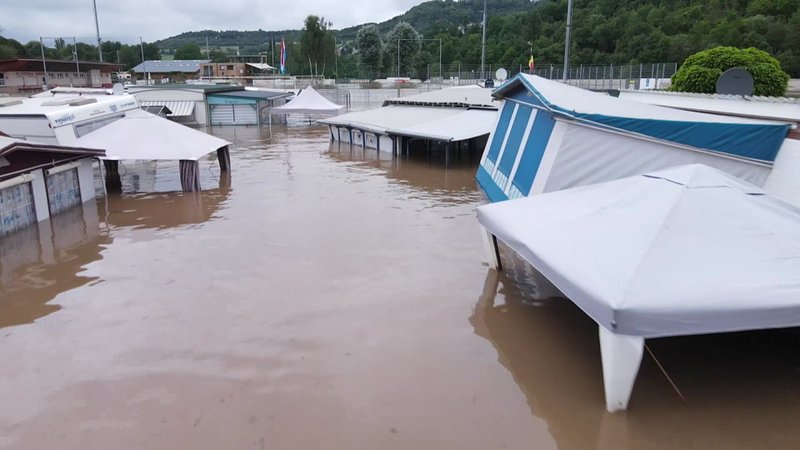 Following last week's floods across several parts of the country, the situation remains dire for some campsites, who were getting ready for a successful summer season. But not all hope is lost, according to "Luxembourg for Tourism", the economic interest grouping responsible for the promotion of national tourism.

Several businesses have been affected by the floods, and a quarter of the capacity of Luxembourg's campsites has been affected, according to Sebastian Reddeker, director of "Luxembourg for Tourism".

Reddeker explained that 18 campsites are temporarily closed. This corresponds to 2,400 places, i.e. almost a quarter of the overall capacity of the campsites. Five of them are expected to reopen by 23 July. For the other 13 campsites concerned, the situation is more critical, with Reddeker explaining that while his group does not have any concrete information yet, it is to be expected that businesses located in flood-prone areas will have to reckon with losses of up to 70% or even the total loss of the season.

It is an outlook which is made even worse by the fact that the sector was actually quite optimistic regarding the season. Many in the camping industry thought that the negative effects of the pandemic could be overcome. However, Reddeker does not believe that the summer season is completely over just yet, pointing out that the hotel sector still expects an occupancy rate of 50-60%, which is "good and better" than last year. This is particularly the case in the Oesling region, says the director.

Business tourism has not restarted yet.

For Reddeker, it is important that those who have suffered damage as a result of the floods are now financially supported. The government has already put measures in place. Businesses should be able to continue to invest. A similar statement was made earlier today by the Horesca Federation.

A lot of uncertainties also remain regarding aspects such as hiking trails, for instance. Reddeker stated that good communication is required, which could also include introducing new tools to better inform tourists about events such as floods.

Many flood victims at the country's campsites are at a loss, as the destruction is still very much visible almost a week after the disaster. RTL reporters visited campsites in Rosport, Born, Diekirch, Vianden, Alzingen, and Ingeldorf to talk with those affected by last week's floods.

One victim deplored that "everything is lost" and that the situation has taken a heavy toll on their mental health. While they tried to save as much as they could, they nevertheless find themselves "on the brink of the abyss".

Another person stated that this was the first time that they had seen such a flood. But solidarity is great - everyone is coming together to help each other out, they added.

Many guests were frightened during the floods with their belongings washed away as they were evacuated to the reception areas or to nearby halls, the owner of a campsite in Ingeldorf recounted. Many were still able to react in time due to the warnings.

On the campsites, many people can still be seen cleaning their tents and caravans. The water level rose above one metre in many of these places. Others have lost their entire canopies. The damage is extensive, and the amount of waste is considerable.

In the worst case, campsites are no longer operational at all: Walls have been smashed in, water pipes are broken, kitchens or even entire restaurants have practically disappeared. The damage has been particularly devastating for permanent campers.

While other campers and local residents often showed great solidarity with the victims by helping out or bringing coffee or food to the sites, some managers expressed regret over the lack of help from local authorities or the responsible services.