Emergency services were on duty on Friday as storms caused major disruptions in Luxembourg. Meanwhile, several people reported a phenomenon resembling a tornado in Kirchberg.

The tornado that devastated parts of Pétange and Bascharage almost two years ago is remembered all too well.

According to some Luxembourgers, a new tornado formed above Hosingen this Friday afternoon. At about 6 pm, RTL received a new video from an Internet user who filmed the incident from a building on Avenue John F. Kennedy in Kirchberg.

Following this, an expert from Météolux was contacted, but could not confirm that it was a tornado. It may be a wet airflow, which can look like a tornado from a distance, he explained and reassured local residents who feared damage in the Hosingen area. 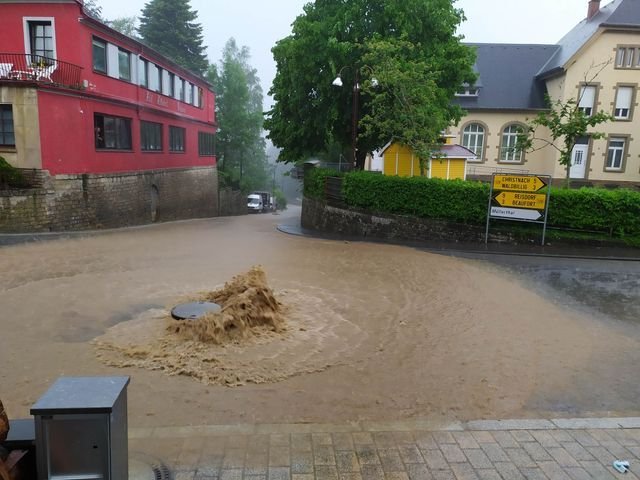 Luxembourg was placed under yellow alert for thunderstorms on Friday afternoon and evening. Hail was also reported in addition to intense rainfall, as were more than 4,000 lightning strikes.

Between 5 pm and 8.15 pm, the emergency response centre CSU 112 handled no less than 918 calls from people in distress. This resulted in 344 interventions from 35 fire brigades, mainly for flooded cellars and trees or objects blocking the roads.

The fire brigade was also called to rescue a person trapped in his car in Reckange-sur-Mess. On the spot, they finally found only an unoccupied car. They also managed to rescue a cow in Mersch and put out a fire caused by lightning in Pétange. Fortunately, no one was injured in the fire.

The majority of interventions were in and around the capital and in the region of Hosingen and Troisvierges and, in the municipalities of Esch-sur-Alzette and Differdange. In the latter municipality, the vehicles were sometimes even under water, as the water level rose so quickly due to the rainfall.