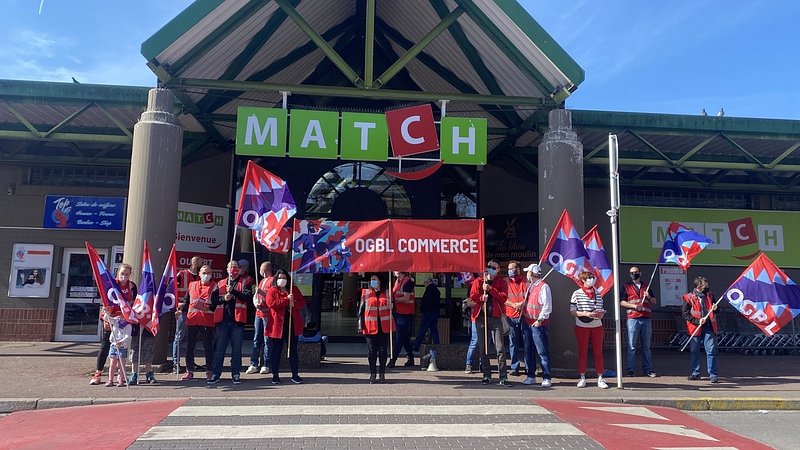 The protest was organised by the Luxembourg Trade Union Confederation (OGBL) and came in light of the supermarket's decision to open in spite of the national holiday.

The nationally celebrated Europe Day was first enacted in 2019. For the first time since, supermarket chain Match has decided to open despite the holiday, which OGBL strongly rejects. Over the course of the past years, a growing number of commercial businesses have been open almost without interruption, which may explain why the Match management has decided to follow suit.

OGBL representatives in Dudelange commented: "The decision was almost taken over night and without consulting any employees or representatives. We only found out because some of the affected people started complaining about the sudden move."

Match employees were prohibited from talking to the press on Sunday. An enquiry from our colleagues at RTL, which was addressed at the management of the supermarket chain, did not receive a response. OGBL emphasised in that regard that their analysis of the situation showed that employees widely rejected the notion of also having to work on the holiday.

Although OGBL members distributed flyers outside of Match in Dudelange and asked clients to boycott the store during Europe Day, a great number of people still opted to benefit from the option. Opinions among customers were split.

Match intends to open on other holidays in the future. Until the management is ready to open a dialogue, OGBL will however continue to attempt disrupting its operations.