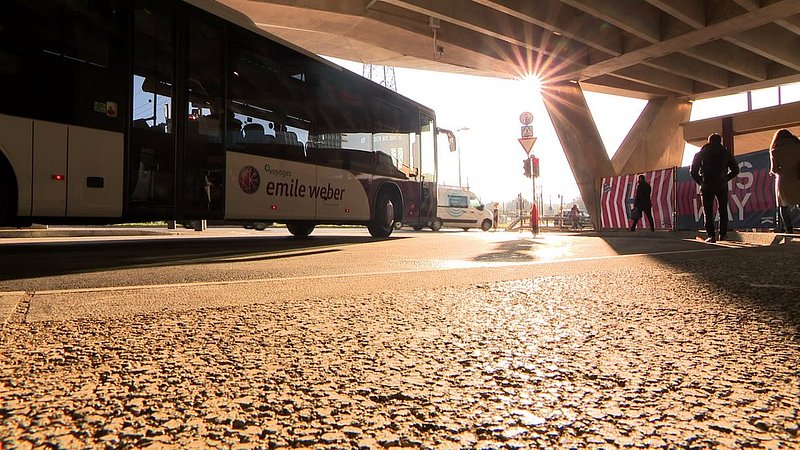 How sustainable are the different means of transport? The European Environment Agency has tried to answer this question with two studies.

What more sustainable means of transport can replace the car or the plane? And which is less polluting: bus or train? These are two questions that the European Environment Agency has asked itself. The answers it gave are not exactly to the liking of the Luxembourg Federation of Bus and Coach Operators (FLEAA), as both do not exactly come out in favour of the bus.

Buses are part of everyday life on Luxembourg's roads, whether it be for journeys within the capital, across the country, or even across the borders. This is why FLEAA was a bit surprised when it looked at the European study "Train or Plane". The study only looks at trains as an alternative to planes and does not mention buses at all.

Buses do play a role in a second study by the European Environment Agency, which compares the emissions per passenger and per kilometre of different means of transport. But this study sets the number of passengers per bus far too low, half of what it actually is, so that the bus ends up with a final score that the Federation considers "too low".

For FLEAA, the two means of transport should not be played out against each other, but rather be considered as individual elements of a more sustainable transport system. Hendrik Kühne, the Federation's General Secretary, states that there is no doubt that trains are "good" and "important", but that when it comes to bringing people closer to their actual destination, there is no way around buses. In addition, roads are already available in abundance, while extensive rail networks still have to be built. Kühne estimates that this is a "10-year investment phase", during which countries can already make use of buses.

In Luxembourg, the train-bus combination works well, according to FLEAA. The idea of increasingly using buses as a means of access to trains has been further strengthened by the RGTR 2022 reform. While the Federation generally approves of the project, it criticises both the fact that the network has been reformed twice in a short period of time as well as the way in which the major 2022 reform has been launched.

Kühne states that "it is a bit of a shame" that the launch was done through a big European tender. While this does make the process more transparent, it also means that only one major market has been put out to tender in this way, which, according to FLEAA, leads to concentration. Kühne regrets that this will likely lead to some of their members no longer offering their services after 1 January 2022.