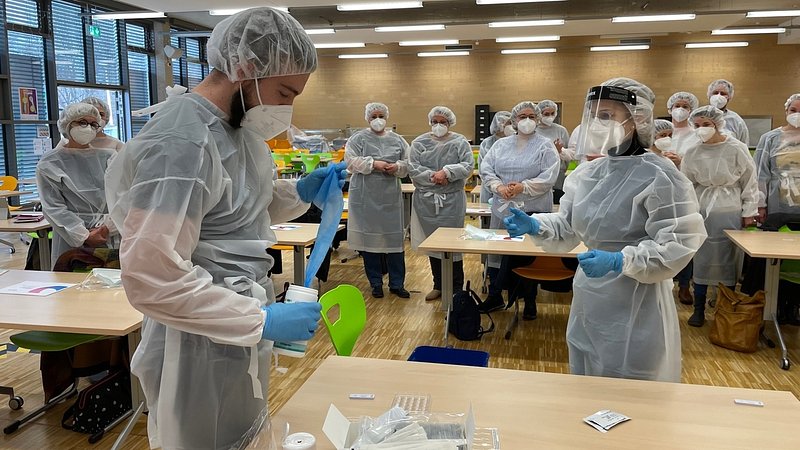 Over the next few weeks, rapid Covid-19 tests will be introduced progressively in Luxembourg's schools. Primary and secondary school students will be entitled to devices allowing them to test themselves.

Competence centres will be the first to take part in this pilot project starting on Monday, while primary and secondary schools will start using rapid tests from 15 March. The idea is to show students and teachers the ideal way of using these devices in schools.

A training session for the staff of the competence centres was held at the speech therapy centre on Friday morning, informing staff members how to carry out these tests with their students. The latter will be tested once a week, according to Gilles Dhamen from the Ministry of Education.

These new tests, which are easier to use and which also allow the user to obtain a result very quickly, are the same as those used in the sports world. As for primary and secondary school students, they will be entitled to a device allowing them to test themselves.

Nicolas Van Elsué, a microbiologist at the National Health Laboratory (LNS), thinks that it is highly likely that in the end, the Ministry will decide to use tests which collect samples from the front of the nose, a much less unpleasant procedure compared to the tests carried out until now. These tests will be rolled out progressively to all schools in order to achieve widespread screening after the Easter holidays. The frequency will also be set according to the availability of different products.

As in Austria, the Luxembourg authorities also want to include teachers and parents as much as possible in this new screening strategy.

The full report (in Luxembourgish) from RTL Télé Lëtzebuerg: