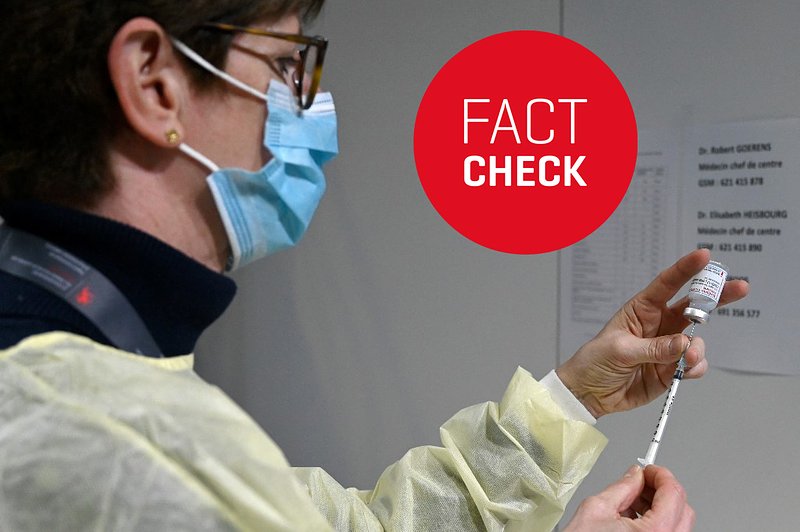 Luxembourg is often accused of lagging behind its neighbours when it comes to vaccination. Our colleagues at RTL 5 Minutes have taken a closer look to determine whether this is actually the case.

Is Luxembourg too slow? At the very least, it is a claim often made and heard during discussions of the country's vaccination campaign, which officially started two months ago.

While it is far behind the most advanced countries such as the UK (about 27% of the population vaccinated at least once, but only 1% have received both doses) or Israel (48%), is Luxembourg really lagging behind?

In Europe, according to calculations made by our colleagues at RTL 5 Minutes, other countries have a vaccination rate close to this level. Notably the neighbouring countries of France (3.96%), Germany (4.2%), and Belgium (3.6%) regarding the first dose. Spain (4.34%) and Portugal (4.55%) are slightly ahead in Europe, as are the Netherlands and Iceland. All in all, Luxembourg is following a similar pace to that of the Greater Region. For the second dose, however, Luxembourg is in fact lagging behind.

Data assembled by the European Centre for Disease Prevention and Control (ECDC) point in the same direction. This time focusing on the vaccination status of people over 18 years of age, these figures confirm that Luxembourg's figures are similar to those of the Greater Region. It is also behind but close to most other nations. And remains far from the most advanced countries. Malta (which has placed additional orders), Denmark, Norway, and Finland are among the countries with the most vaccinations. Luxembourg's delay is more apparent in the case of vaccinations described as "complete", i.e. with two doses.

Luxembourg is speeding up the vaccination process

Although it has indeed started off at a slower pace than its main neighbours, Luxembourg has just stepped up its vaccination campaign. In fact, it has stepped up the pace quite considerably. During the week of 15 to 21 February, 8,092 injections were carried out. Of these, 6,004 were the first injections. It was by far the most active week since the campaign began at the end of December. And according to the vaccination figures published for Monday and Tuesday, this rhythm seems to continue over the course of the current week.

However, vaccination automatically relates to vaccine stocks. Luxembourg, like other countries, is dependent on deliveries from pharmaceutical companies. According to the schedule of deliveries communicated by the Ministry of Health on Wednesday, Luxembourg has received enough to fully vaccinate 27,495 people. That's nearly 55,000 doses of the vaccine. It has already used 33,370 of them and has enough to guarantee their second dose to those who have already been vaccinated once.

Other countries have adopted a more aggressive strategy, with more sustained vaccination but fewer stocks. In this sense, Luxembourg is slower but also less at risk of shortages in the event of a supply problem. Compliance with manufacturers' vaccination instructions is therefore ensured. On Thursday, Minister of Health Paulette Lenert announced that Luxembourg will increase vaccination with the AstraZeneca product and only keep in stock the strict minimum, i.e. the second dose to be injected ten weeks later. A "small risk" that is expected to "save lives", according to Lenert.

According to planned arrivals, Luxembourg expects to have vaccinated "69,887 people by the end of March 2021". Mainly thanks to vaccines produced by Pfizer/BioNTech and AstraZeneca. A little over 11% of the population. It should then be able to step up its campaign further once other vaccines such as CureVac and Johnson & Johnson are authorised.