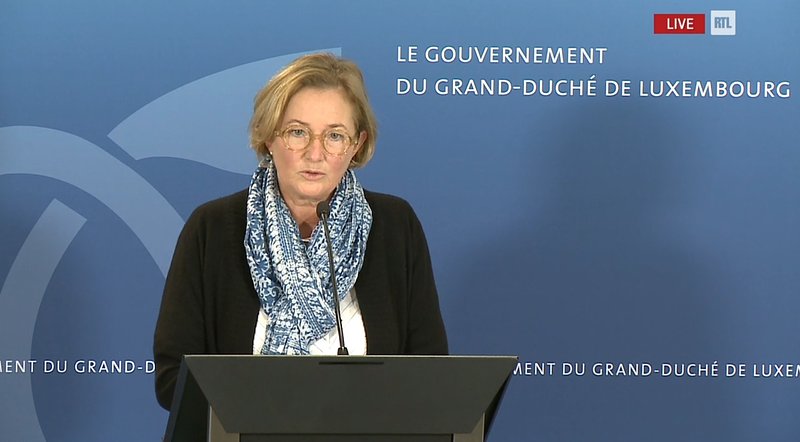 The Minister of Health took to the podium on Monday night to discuss Friday's updated measures, providing a brief recap of the situation thus far.

Paulette Lenert once again greeted journalists on Monday night, saying she felt a responsibility to address them following the day's government meetings.

She began the briefing by contextualising the situation development over the past two weeks, in response to criticism that the government should have introduced the new restrictions sooner. On 13 October the number of daily cases was 109, while wastewater reports did not show a huge virus presence among the country's treatment plants. By 17 October, the government had already organised crisis meetings and discussed bringing in new measures - a decision which was quickly advances as cases shot up the following week.

A number of clusters had since been identified in retirement and care homes, while the virus has increased among those aged 65 and over. More than 80% of those currently hospitalised are aged 75 and up.

Lenert expressed her own alarm as, on 22 October, the wastewater report indicated a much higher number of cases than the tests were showing. Simultaneously, the number of daily cases shot up - resulting in the new restrictions announced last Friday.

As a reminder, households can no longer interact with more than four people outside the household at a time, unless masks are worn. For groups exceeding 10 people, the 2 metre distance rule must be observed in addition to compulsory masks. Events for over 100 people will be banned, while for smaller events, such as sports, food and drink should no longer be served. Restaurants will not be allowed to accommodate more than 100 customers at a time.

A curfew has also been installed between 11pm and 6am.

The government's current focus is to avoid a full lockdown, instead reducing inessential activities, while still allowing schools and businesses to operate. Only professional sports leagues will be allowed to function, while the Minister of Sport is expected to hold a press briefing later this week.

The range of fines which can be issued to those breaking the new regulations, including the curfew, has been increased to €100 rising to €500, from €25 previously.

When questioned on the subject of schools, Lenert explained that tracing data showed infection sources among pupils continue to remain within the familial sphere. For this reason, she said these could not be described as clusters, as the infection came from outside the school.

The new law is expected to undergo a vote over the coming days.