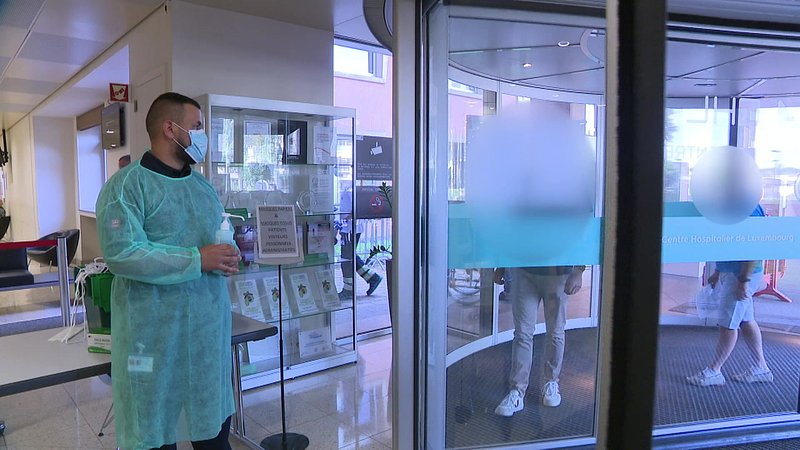 Hospitals in the Grand-Duchy are also coming out of the lockdown and are trying to become fully operational again. However, a number of difficulties still remain.

The new normal already starts at the entrance of the Centre Hospitalier (CHL) in Luxembourg City: disinfecting your hands, putting on your face mask, and getting your temperature taken.

The procedure is fast and seems straightforward at first glance. However, for the most part, leaving the lockdown is not as simple. The hospital is slowly catching up to the delays in surgeries.

The field hospital, which had been built with the support of a NATO agency at the beginning of the crisis, is still right next to the CHL. What is going to happen with it?

Another challenge comes in the form life threatening emergencies, when there is not enough time to do a corona test first. This happens two to three times per day. A significant effort, also in terms of staff, and especially complicated during the night.

While the CHL confirms that people did return to the hospital and had faith, the hospital also notes that many had been negatively affected by the lockdown.

Doctors at CHL found that many people had waited too long to go to the hospital. As a result, people now showed symptoms which doctors have not seen in a long time, such as peritonitis.

The hospital in Esch is still lacking about 100 staff members until it can become completely operational again. The main problem here are people deemed "vulnerable" and therefore still unable to attend work.

Meanwhile, in the Centre Hospitalier Emile Mayrisch (Chem) people at times had to queue up on the street before they could enter on Tuesday afternoon.

Parts of geriatrics and the rehabilitation centre had to remain closed. Very much a common scene of the "new normal" in Luxembourg's hospitals.

In the context of all of this, there also still remains one unknown factor: How will the coronavirus evolve now that people are leaving lockdown and going on holiday again?