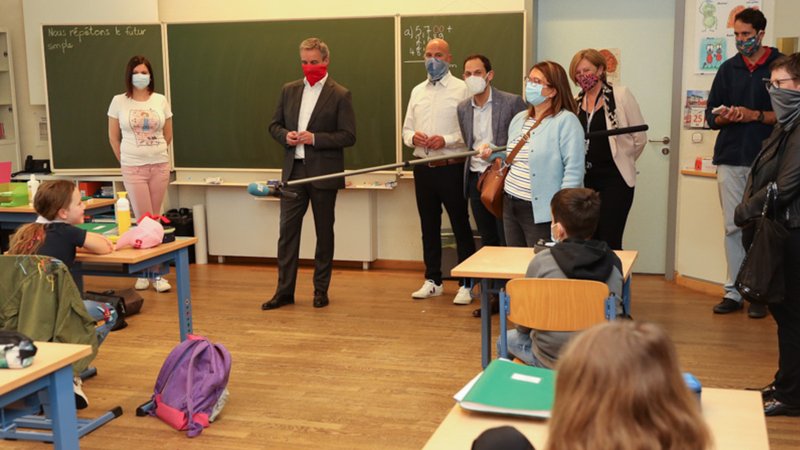 Almost 52,000 children returned to school on Monday. Claude Meisch thanked all those involved in the reopening by way of a press release.

After 10 weeks of closures due to the pandemic, primary school and pre-schools across the country opened their doors once more on Monday. Reception and competence centres also reopened.

According to the Ministry of Education, the return to school centred on security and equal educational opportunities.

52% of the 52,000 pupils in Luxembourg attend school in the mornings only for their week of lessons. 42% are enrolled in supervised studies in the morning and around 30% are also supported in the afternoon, according to figures cited by the ministry.

The reopening has been structured with alternating weeks so that each child has the opportunity to go to school. In order to minimise the number of children present at the same time in the establishments, each class has been divided into two groups: in week A, the pupils of the first group go to school while the others stay at home and in week B, the groups are reversed.

The essential content to be taught to students by the end of the school year has been defined with the regional offices. The impact of the health crisis on children's education must be minimised so that schools can reopen normally in September.

The interaction between the school and the reception of the children could be guaranteed thanks to the collaboration with the municipalities, maisons de relais, Syvicol, Fedas, Felsea and many others, according to the press release.

The Minister expressed his thanks to all those who collaborated to make the reopening possible.

Following an appeal by the Ministry of Education, over 1,000 addition members of staff have been recruited to ensure the process ran smoothly. A thousand people have been hired to provide supervised studies, with a further 300 people hired to oversee afternoon childcare sessions.

All schools and childcare centres were equipped by the logistics unit set up by the government at the start of the health crisis.