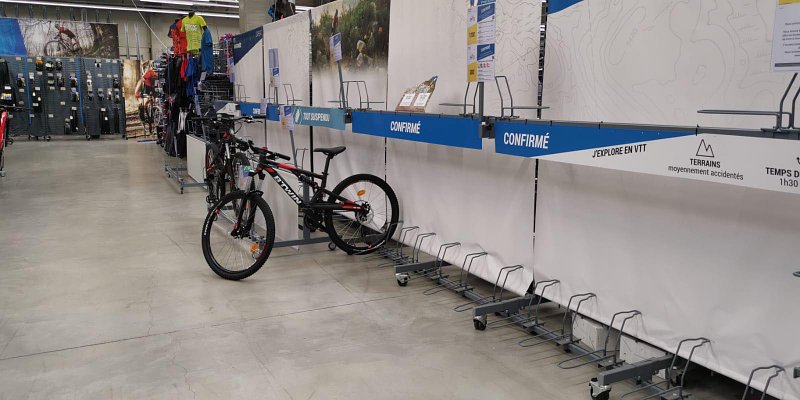 The bicycle aisle at Décathlon in Arlons, photo taken on 22 May 2020 / © Mobile Reporter

Sporting goods sold at stores in Luxembourg and in border regions have quickly sold out.

Bicycles, inline skates, dumbbells, weights, accessories: items like these are difficult to come by at the moment in Luxembourg and across the border. This goes for sports shops as well as shopping centres, where the sporting aisles are practically empty.

While sports shops only experienced this rush in recent weeks, workers in shopping centres have already observed this trend at the beginning of March.

In fact, bicycles, dumbbells, and weights were quickly sold out when the government announced the lockdown back in mid-March. This may have been the result of the "soft" lockdown, which still allowed households in Luxembourg to spend time together outside.

Today, the "stragglers" eagerly await shops to restock their empty shelves. According to RTL sources however, this could take some time.

"Stocks have been plundered"

Both the manager of an "Intersport" shop in Luxembourg and another of a "Décathlon" in Arlon confirmed upon enquiry that "our entire stocks have been plundered".

At Décathlon, online orders are mainly responsible for "literally emptying the warehouses", as its manager explained. Intersport also confirmed that they experienced "a rush" on certain sporting goods from the first day that lockdown measures were lifted.

The Intersport manager also stated that it would be difficult to keep up with demand in the spring season as he experiences difficulties ordering mountain bikes, for example. He believes that the situation is the same at Citabel Sports.

The issue extends beyond bicycles however, as the aisle of home sporting goods has also been emptied. It is therefore just as difficult to reorder poles, dumbbells, or weights.

"People are looking for something to do", explained the manager at Intersport. "The weather is nice, and some have not returned to work yet. And then you also have to take care of the kids".

Different shelves have also been emptied at Décathlon: "We have not a single ping-pong table left", stated its manager. The same goes for badminton equipment: "Our customers have bought every single net, bat, and shuttlecock".

When asked the inevitable question, the answer is the same on both sides of the border: it is unclear when stocks will be refilled.

Both managers stated that this is a "global" problem, and customers will need to be patient until certain goods are available again in store.