A woman and her child crossed the border to France to dump their waste in Villerupt. She didn't reckon with walkers catching her in the act, filming her, and forcing her to take her bin bags back.

In the video shown above, a woman driving a car registered in Luxembourg is seen unloading a number of bin bags from her car with the intent of dumping them in Villerupt, a community bordering France and Luxembourg. However, walkers passing by realised the woman's intent and shamed her into putting the bags back in her car.

Our colleagues at RTL 5Minutes contacted François*, one of the walkers who filmed the incident. He explained: "We were walking along and noticed that a woman and her child were taking their bin bags and dumping them next to the forest, hidden from view by a bus. The bags were filled with boxes, rubble, blankets...a bit of everything - like a storage room. All of these were things the woman should have got rid of at a recycling centre."

Having been caught red-handed, the woman and her child were forced to pack up their bags, all while the walkers shamed them with phrases like 'That's shameful!' and 'Well done, I'll come and leave my waste near your home', and criticizing her for for showing that kind of behaviour to her child.

The woman attempted to justify herself, saying she thought the municipality's bin trucks would remove the bags. The walkers were not at all convinced, reminding the woman she has no right to throw her bins away in France, and in a forest no less.

François did specify that he does not know if they were Luxembourgers, as the car's registration plates do not reveal anything about her citizenship. Without wanting to defend the woman, he nevertheless noted she seemed very embarrassed and her son was even more embarrassed. It is difficult to know whether the two learnt their lesson.

The video briefly went viral on social media, but was taken down to keep those featured in it anonymous. For that purpose, our colleagues have blurred the video so as not to identify the individuals in it. A police report was submitted, but Villerupt's mayor Alain Casoni has been unable to respond to requests for comments.

What are the sanctions for fly-tipping in France? 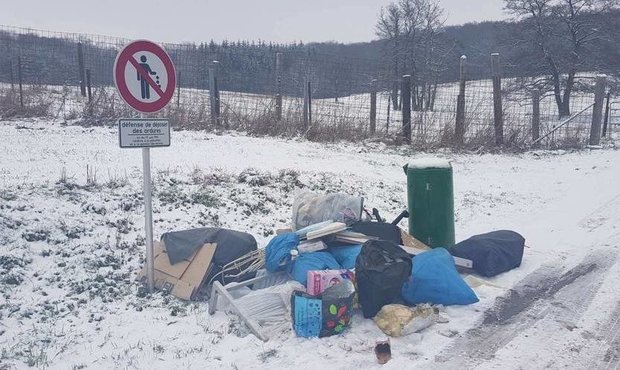 For those with a penchant for fly-tipping, sanctions are much higher in France than in Luxembourg..

In 2017, the French Mayors' Association (AMF) distinguished between three different cases of fly-tipping and corresponding sanctions:

• Individuals abandoning or dumping waste commit a second degree transgression, which is punishable by a €68 fine. This could be reduced to €45 if paid quickly, or increased to €180 if paid late.

• Individuals abandoning or dumping waste transported by car commit a fifth degree transgression, punishable by a fine of up to €1,500 or €3,000 if a repeat offence.

• Firms abandoning or dumping waste risk two years in prison and/or a €75,000 fine.

Anybody caught fly-tipping in Luxembourg risks a fine of €49 for 'non problematic waste', such as chewing gum or packaging. This could increase to €250 for abandoning larger items. The actual dissuasive nature of these fines remains unclear due to high living standards. Between 2018 and 2019, 277 fines were handed out to a total cost of €32,916.

It also appears that fines do not differentiate between individuals and firms.