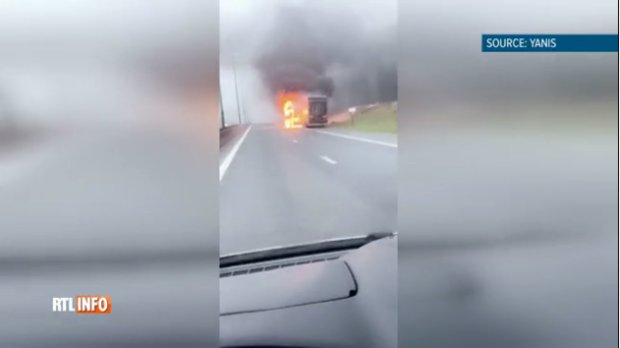 An incident involving a Luxembourgish lorry in Belgium has caused considerable ire with the commanding firefighter of the Luxembourg province.

On Wednesday morning just after 11 am, a lorry with Luxembourgish number plates caught fire on the E25 near Baraque de la Fraiture, Belgian media report. It appears that a witness, who filmed the video, saved the life of the driver. The man Yanis told RTL.be: "I saw a lorry driving, which had begun to catch fire. The driver stopped on the hard shoulder and I looked around me and couldn't see anyone. I knew the driver must still be in the vehicle, so I didn't hesitate and ran to help him get out."

But the fire was not a normal blaze, something emergency services were not aware of in advance. The lorry was missing its 'ADR' plates, which indicate that the vehicle was transporting dangerous goods, consequently meaning firefighters put themselves at an immense risk to extinguish the fire. The commanding officer of the Luxembourg province emergency services, Stéphane Thiry, criticised the firm for not having these plates. He added that this was a European regulation and every logistics firm must adhere to the regulation for their drivers' safety and the safety of others.

Thankfully, the fire was extinguished with no further incidents as firefighters had taken all precautionary measured and partially closed off the E25.