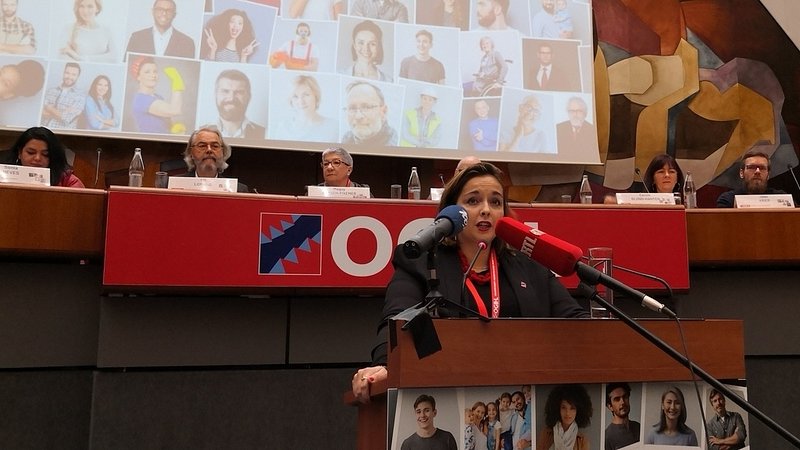 The newly appointed head of the union did not hesitate to dive into sensitive topics, and even name-drop a number of politicans in the process.

With 97,5% of the votes, Nora Back was named the first woman to head the Independent Luxembourg Trade Union Confederation (OGBL). In her first speech at the union's convention she focused on both national and European-level matters, emphasising the importance of continuity in the forthcoming years.

At 40, she is exactly the same age as the union she took over on Friday evening. Women in the room were approving of her tone of voice and message in an hour long speech, in which she demonstrated both decision-making knowledge and fearlessness to bang her fist on the table if a situation were to become unacceptable.

The union's political priorities for the next five years are varied, ranging from childhood care to employment and pensions. A common red thread, namely that of a strong social state, must remain in all of these discussions. A high-performance health insurance fund, optimal health care and an irreproachable pension system are top priorities.

In terms of market digitalisation, the OGBL wishes to back-up and support those departments affected and threatened by digitilisation. Topics such as working from home and reducation of working hours are currently being analysed by the OGBL.

Not afraid to pin politicians

Back presented a substantive speech in which she was not afraid to mention names, and respond spontaneously to reactions in the room. She recalled the government agreement signed in 2014 which stipulated that family allowances should be adapted to the evolution of wages and which, according to her, is no longer the case since 2006.

Nora Back therefore asked for this situation to be changed and move on from simply an election campaign promise. Following the announcement of the new CO2 tax, the OGBL asks the government to distinguish between a socially jusifiable and socially sustainable tax. Back wants quick compensation for small and medium income households.