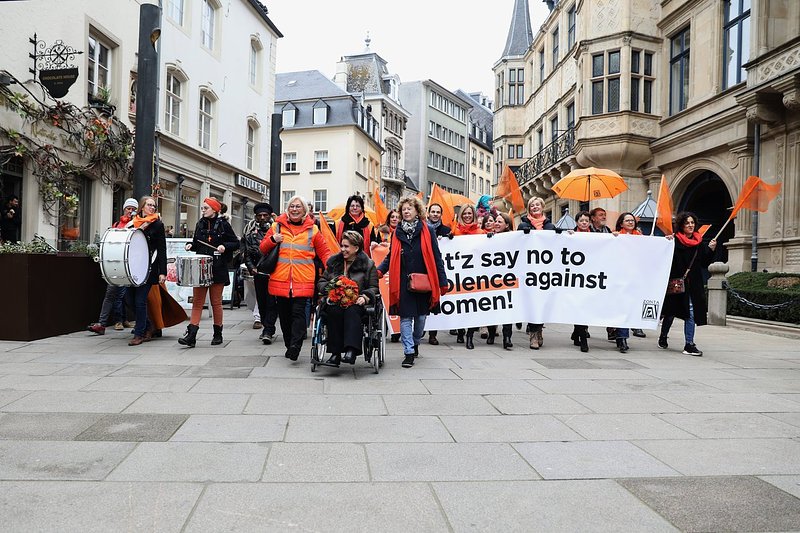 In the Grand Duchy, too, domestic violence is an ongoing issue. 739 cases required police intervention in 2018, which adds up to an average of two cases per day.

231 cases resulted in the abusive partner being expelled forcibly from the home. The majority of domestic violence victims are female. Many suffer in silence as they are afraid of asking for help. The aim of the solidarity march on Saturday was to raise awareness about the issue, which is not spoken about enough.

In support of the United Nations' campaign to eliminate domestic violence,  the slogan of the march was 'Say no to violence against girls and women'. With the colour orange, events worldwide are raising awareness about the subject. In the Grand Duchy, 400 people attended the march, starting at the Glacis car park in Limpertsberg on Saturday morning.

Victims are often too embarrassed to ask for help, which is why it's important to give them a voice and let them know they're not alone, according to the National Women's Council's Danielle Backer-Bauer, who urges the public to tackle the issue at its roots.

Her idea is to raise awareness amongst the public, starting at a young age, notably by educating school kids.

The march travelled through the city centre, arriving at Place Clairefontaine. There, marchers demanded several changes, such as more spaces in women's shelters, improved access to social housing and the creation of a databank for femicides. Grand Duchess Marie Teresa, who took on the role of the Orange Week's patronage this year, was also present. The Grand Duchess was in a wheelchair, presumably still recovering from her knee operation last month.

Her Royal Highness is an active advocate against violence towards women both in Luxembourg and abroad, having spearheaded the Speak Stand Rise Up forum in March in this year.

Maurice Bauer, equal rights member of the Luxembourg City municipal council  criticised the fact that a petition against violence against women only received 1,700 signatures in a society that is affected by more than 700 cases of domestic violence a year.

Another series of events is planned in order to further educate the public about violence against women up until 10 December.